CHARLOTTE – Dr. Jerry Francis Jackson of Shelby, NC, who served Chowan University as president from 1989 to 1995, passed away here Saturday, April 2 from a lengthy illness.

Dr. Jackson is survived by his wife, Carolyn Grace Laughlin, and their two children, Jami and West, and two grandchildren. 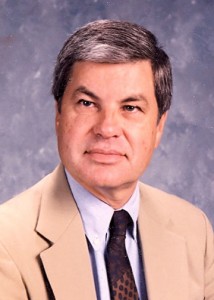 The twentieth president of what was then Chowan College, Dr. Jackson was born in Clinton, NC on Oct. 1, 1938. Attending Mars Hill College, Jackson received his A.A. in 1958 and his B.A. degree in 1960, and in 1961, Jackson earned his M.S. degree from Southern Illinois University in Carbondale, IL. In 1988, he earned a Doctorate in Education from the University of South Carolina, with additional postgraduate studies at East Carolina University, NC State University and the University of Cincinnati.

Jackson has had a distinguished career blending his love for education with his strong faith. As a faculty member in History and Political Science at Campbell University in Buies Creek, Jackson advanced to Assistant to the Academic Dean and to Dean of Students and Director of Admissions. Jackson also served as Director of Development with Sampson Technical College in Clinton before moving on the become Vice President of Advancement at Wingate University and later, Vice President for Development with the Foreign Mission Board of the Southern Baptist Convention in Richmond, VA. In 1989, Jackson was named President of Chowan College.

“The Chowan family mourns with the Jacksons. We are indeed grateful for his past leadership,” said current Chowan University President Dr. Chris White of his personal friend and professional colleague for many years. “Through his leadership, Chowan returned to four-year status and significant property was acquired to house the Jenkins Center and now Reed Hall.”

Perhaps the most important decision of Jackson’s six-year tenure at Chowan was the formal transition from a Junior College awarding Associates Degrees to a four-year Senior College eligible to award Baccalaureate Degrees, which was voted into approval by the Trustees in 1990.

Expansion also marked Jackson’s presidential tenure through the acquisition of additional acreage for athletics surrounding the Helms Center on Union Street and the purchase of what now houses the Jenkins Wellness Center and the new Reed Hall on Lakewood Drive. Jackson also increased the number of female trustees on Chowan’s Board, and Elaine Myers of Ahoskie became the first woman to serve as Chowan’s Chair of the Trustees under Jackson’s presidency in 1994.

Also hallmarking his tenure, Jackson began the Ambassadors program to highlight campus student leaders who excelled academically to host special activities and campus events as a way to set the tone for moral values and spiritual life on campus. Jackson strove to emphasis the importance of Chowan’s quality of student life and student retention and development of academic support services, even going so far as to travel the roads himself to visit students, schools, and guidance counselors.

In 1991, a scholarship was established in honor of Carolyn Jackson’s parents, the James Marion and Grace G. Laughlin Scholarship, and all gifts to Chowan University to honor the passing of Dr. Jerry Jackson can go to support this endowment.

The service for Dr. Jerry Jackson will be held at Shelby Presbyterian Church at 2 p.m. on Thursday, April 7.