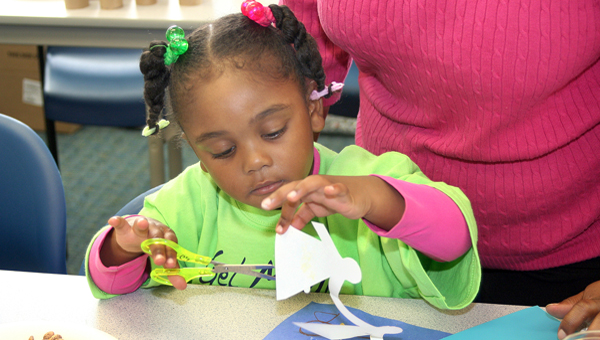 MURFREESBORO — When it comes to managing diabetes you can’t beat eating smart and moving more.

That’s the concept Connie Perry of Winton tries to adhere to when looking after her health. Perry was diagnosed with diabetes in 1985. While she says she has no problem managing her condition, it’s always nice to get out and learn more about the chronic disease she lives with and affects nearly 25.8 million Americans.

On Saturday, Perry made her way around the Diabetes Health Fair, held at Chowan University’s Jenkins Center and Reed Hall, sponsored by the Murfreesboro Recreation Department.

The family themed event offered sport competitions for younger people, a walk around CU’s Squirrel Park for diabetes prevention as well as health screenings and information offered by area agencies geared toward adults. The Food Bank of the Albemarle was also on hand with their mobile food pantry to educate citizens about its services and attract sponsors.

Perry was pleased to find some healthy recipes from a local agency.

“It’s nice (to have this event); it’s making people more aware,” she said.

The event was funded by a Community Benefits grant received by the Recreation Department from the Roanoke Chowan Foundation by way of University Health Systems.

“We started it for awareness about diabetes, the extent of its damage and what we can do about it,” said Odum.

She noted how family members can influence each other to eat right and read nutrition labels closely.

“That’s why we made it a family affair,” she said. “A child can get mom, dad, grandma, grandpa to look at the labels.”

Odum said there are similar events coming up, including a two week Kids Cook day camp that will teach children about healthy cooking.

Kristen Holley made sure to take full advantage of the event by bringing her children Kristopher and Ariel Solomon along.

The Murfreesboro mom helped her children create food art at one station and her eldest, Kristopher, signed up for soccer through the Recreation Department.

“I wanted to be more aware of diabetes and have my kids learn as well,” she said.

Perry was happy with the event’s family atmosphere and how it targeted both outlaying spectrums of the population—young people and senior citizens.

“It’s important to educate children and seniors,” she said. “Today we’re all together.”

MURFREESBORO – You don’t have to win pretty – you just have to get the ‘W’. In the last month,... read more