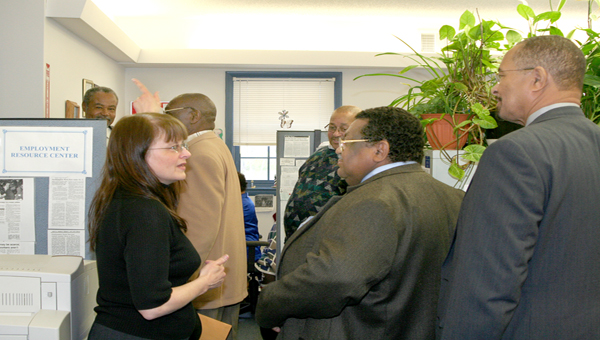 JACKSON — Mountains of important files line the hallways, filing cabinets sit every where, even in bathrooms, and workers with make-shift offices in the foyers near fire exits.

On Tuesday, the commissioners held a special meeting with DSS Board members to discuss the delayed DSS building project as well as tour the circa 1920 facility.

If there is one thing, both entities understand it’s the need for a new facility.

However, county officials are continuing to wrestle with unpredictable economic atmosphere where funding falls short and unknown financial responsibilities continue to trickle down from the federal and state governments.

Meanwhile, DSS Board members worry about the increase of construction costs and the project never becoming a reality.

The $7.46 million facility was in line to start construction until a financial review in February revealed the county was projected to have a “break even” year and would possibly have to dig deeper into the coffers to make up for expenditures passed on by state and federal entities.

The DSS project is being funding by a USDA Rural Development grant of $500,000 as well as a $6.9 million loan, funds in-part from the American Recovery and Reinvestment Act.

The county’s annual debt payment for the building would be $435,000 with a 65 percent reimbursement from the federal government.

A fading sunset and fiscal responsibility

At the beginning of the discussion, DSS Board Chair Eugene Taylor explained the reason for the meeting

“It had appeared, to the DSS Board, that the project was beginning to fade into the sunset and not that we wanted to meet the commissioners to demand anything; we just wanted to make sure that we are working together and we had a clear understanding as to what was at stake,” he said.

Taylor added the DSS Board wanted to explore and see if there were any avenues in which they could work with the county and see the project come to pass.

“As you will see when we tour the DSS building there is a great, great need for this project, at the same time we understand totally that the condition of the county, we feel that the commissioners are doing a fine job with what we have to work with, but if we sit down together and look at other avenues and possibilities and maybe something that can be done and what funds that can be identified as far as being able to support this project,” he said.

Taylor noted DSS brings in $55 million worth of federal, state and county programs into Northampton and employs 70-plus workers.

“We would just like to see this project move forward,” he said.

Commission Vice Chair James Hester, heading the meeting for an absent Chair Fannie Greene, said it wasn’t the desire of the board to let the project go off into the sunset, because there is a need for a new facility.

He added, however, the commissioners did have objectives in mind, including to continue providing the county’s present services to citizens and to do so without raising taxes or laying off employees. Hester said building the new DSS facility is an objective as well. He also spoke about the state mandates the county is facing.

“The county has just been notified that they will have to pick up the expense of maintaining the electoral machines that the state had been giving us $25,000 on,” Hester said.

He added there is a General Assembly bill being worked on to change the distribution of the Lottery funds and to reduce the school money from the Lottery fund from 30 percent to 10 percent.

Hester said County Finance Officer Dot Vick is predicting a year like she has never seen before in the county’s finances.

“And that’s frightening,” he said. “Now I believe, according to (DSS Director) Dr. (Al) Wentzy’s figures, we have 43 percent receiving DSS services, that leaves (57) percent of us to pay the bill and we just can’t see far enough ahead.”

“Please know that every county commissioner, our main objective is fiscal responsibility; that’s our number one objective as a commissioner,” he said.

Carter added that if given an ultimatum between increasing taxes or constructing a new DSS facility, he said he would have to hold the tax rate where it is.

Taylor asked county officials to comment on the two year window and extension process in reference to the USDA loan and how they would react if the federal or state governments mandated the county to update the DSS facility.

“Where does that put the citizens of Northampton County then?” he asked.

“Sir, I don’t know how we would react or respond to a state or federal mandate to upgrade county facilities,” said County Manager Wayne Jenkins. “Off the cuff, I would ask the required agency to provide the funding needed to update the facility. I don’t know how to answer that.”

Jenkins noted the 30 year $6.9 million loan had an interest rate of four percent and USDA did authorize it for two years, expiring June 23, 2012.

“USDA officials are receptive to an extension of that time, however, a federal requirement states that all recovery funds have to be completely spent and projects complete by July 1, 2015,” he said. “So we’re looking at a little over four years.”

He added the estimated construction period for the facility was 15 months.

Jenkins said the county’s annual debt payment for the building would be $435,000.

“Of that $435,000, if the federal government continues as it is this current fiscal year, we can expect a 65 percent reimbursement annually on that payment,” he said.

Jenkins noted the county’s undesignated fund balance in the audit report stood at approximately eight percent. The average for counties the size of Northampton is around 20 percent. He added the commissioners have set their target goal at that amount and plan to increase the fund balance by one-half of one percent per year.

Jenkins also noted the items coming down the pipeline to Northampton, including the purchase of school buses and workers’ comp for state funded employees for school personnel. Jenkins added he was just informed Cooperative Extension is also facing a 25-30 percent cut to their budget at the state level.

Jenkins spoke about a local quarter cent general purpose sales tax that the county can impose due to the state taking over the county’s share of Medicaid costs. The measure was recently passed in neighboring Hertford and Halifax counties.

He noted the board would have to place that option before voters in a referendum before it could be enacted.

“That could be a dedicated revenue source to repay the county’s 35 percent of that debt,” he said. “So there are opportunities, but with those opportunities come risks.”

Carter asked how long it would take to get the referendum before voters.

Jenkins said it would take 120-150 days to get the question on the ballot and it would be effective six months after approval.

Towards the end of the meeting Taylor said the window of opportunity is closing to get the project done.

“July 1, 2015 will be here before we know it,” he said. “Another concern is the construction cost is increasing the more we delay it.”

“I just want to reiterate that whatever we do, we do it cautiously,” she said. “Mr. Carter made that statement that one of the primary objectives of those sitting on this board is to be fiscally responsible and that’s what we really want. …Let’s move cautiously in these trying times, financially trying times, and if there is a window of opportunity out there and we are able to take advantage of it—I don’t think we would be remiss in giving you all consideration.”