The bride was given in marriage by her parents, Mr. and Mrs. Harry A. Slayden Jr. She wore a gown from Tiffanys Bridal.

The flower girl was Zoe Hawkins of Glen Allen, niece of the groom.

The best man was Henry L. Joyner Jr. of Ahoskie, father of the groom. Groomsmen were Chris Hawkins of Glen Allen, brother-in-law of the groom, and Michael Shields, A.C. Hill and Grayson Currin, all of Raleigh and friends of the groom. The Junior groomsman was Christopher Young of Richmond, nephew of the bride. Their attire was provided by The Grooms Corner.

The ring bearer was Jackson Hawkins of Glen Allen, nephew of the groom.

The wedding directors were Kim Long and  Sharon Tucker. Jennifer Hawkins was the reader. Music at the ceremony was provided by Christopher Ward, organist, and Erin Thomas, soloist.

The rehearsal dinner was given by the groom’s parents at Maggiano’s Little Italy. The reception was held at Willow Oaks Country Club.

The bride attended University of Virginia and graduated in

2007 with a B.S. in Marketing from Virginia Commonwealth

University. She currently works for the VCU Health System and plans to pursue her B.S. in Nursing from VCU in May.

The groom graduated from North Carolina State University in 2007 with a B.S. in Civil Engineering. He is a pilot in the Richmond area.

The couple will honeymoon in St. Maarten and reside in

January 22, 2011 – Round the Clock Shower given by Frances and Nicky Evans and Julie and David Shields at the Shields home in Ahoskie.

January 29, 2011- Dinner Party given in honor of the couple by Lynn and John Moreau at the Moreau home in Richmond.

February 19, 2011 – Bachelorette weekend at Nags Head, hosted by Maids of Honor and Bridesmaids.

February 26, 2011 – Wedding shower hosted by bridesmaids at the home of Amy Hawkins in Richmond. 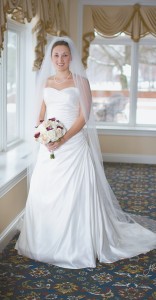