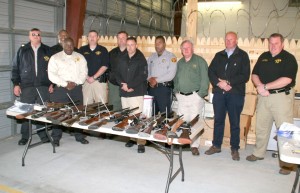 Law enforcement officials from the Bertie, Hertford and Southampton County (Va.) sheriff’s offices along with the Murfreesboro Police Department are still actively working a rash of break-ins and thefts that have occurred in two states since November of last year. The officers are shown here standing over a table full of weapons discovered last week during a search of five Murfreesboro homes. Staff Photo by Cal Bryant

Monday morning, Murfreesboro Police Chief Darrell Rowe said individuals filed by tables full of stolen items, searching for personal property that may have been taken from their residence in the past few months.

“It’s a lot of items to sort through; people have been coming in and out today to look over the stolen goods in an effort to identify if that property belongs to them,” Rowe said. “All of the weapons we discovered last week have been accounted for, but there remain other items that we’re unsure from where they were stolen.”

After searching five residences (two in Murfreesboro; three in Mapleton) on Thursday of last week, Rowe, assisted by the Hertford County Sheriff’s Office, arrested four individuals in connection with at least 20 burglaries and five cases of arson in two states. Charged with a number of felonies (including breaking and entering, larceny of firearms and possession of firearms) were Lionel A. Walden, 21, of Conway; Antonio L. Holley, 22, of Mapleton Road, Murfreesboro; Darrin O. Deloatch, 21, of Mapleton Road, Murfreesboro; and Gennile M. Barber, 33, of East Main Street, Murfreesboro. Deloatch also faces a felony fugitive warrant in Virginia.

Meanwhile, warrants have been issued for the arrest of another suspect in this crime spree – 22-year-old Japree Lortez Brooks of 122 Spring Branch Road, Murfreesboro. He is described as a black male, standing 6’ tall and weighing 200 pounds. MPD Chief Darrell Rowe said Brooks is believed to be armed with either a .357 magnum or a .40 caliber pistol. With an extensive criminal history, Rowe said Brooks is to be considered a dangerous suspect.

Bertie County law enforcement officials have connected the group to four crimes, including larceny and arson at the historic Harrington Lodge near Lewiston and a residence on NC 11 Business, south of Aulander. Those crimes were committed last week.

Another breaking and entering and larceny was reported on Hexlena Road as well as a B&E at Byrd’s Hunting Club near Roxobel.

Bertie Sherriff John Holley advised Bertie County residents if they experienced a recent break-in on their property and has yet to report it to please come to the Bertie Sheriff’s Office.

Additional charges have been filed in Northampton County, according to Chief Detective, Sheriff’s Captain D.M. Harmon. He confirmed on Monday that warrants  had been drawn for Deloatch and Brooks for crimes that occurred in August of last year and more recently this month. Harmon said there could be more arrests and charges pending in both cases.

On August 13, a nighttime break-in of a home located at U.S. 158 (Seaboard address) was reported to the NCSO.

Harmon said the homeowner was at work at the time of the break-in and items, including a 32-inch flat screen television, a laptop, bow and arrows and other items, were stolen from the residence.

Deloatch and Brooks are charged with second degree burglary, felonious larceny and possession of stolen property.

On March 10, the NCSO received a report of a break-in at a residence on Dusty Hill Road near Conway. Harmon said in that case the homeowner was at work when the break-in occurred during the daytime.

“Due to the recent arrests in Murfreesboro, the victim was able to identify some of the stolen items,” said Harmon.

“Both cases are still under investigation and there could be more charges pending,” added Harmon

In addition, Harmon said there are two other breaking and entering crimes still under investigation that could be related to those suspects recently arrested.

The suspects are also tied to the burglary and arson of a Burnt Reed Road home in Boykins, Va. on March 10.

Three of the five suspects in the case are no strangers to local law enforcement officers.

Holley is currently serving 24 months probation for a January 2011 judgment for possession of stolen goods.