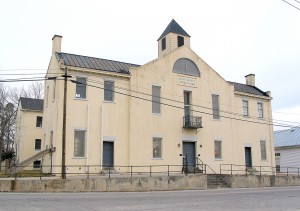 The historic Gates County Courthouse (circa 1836) is in need of repairs and an effort is underway among local leaders to ensure this important link to the county’s past is preserved. File Photo

GATESVILLE – The United States of America was a mere 60-years-old when Gates County opened its new courthouse in Gatesville in 1836.

Now, 175 years later, the stately old building, one of a small number of ante-bellum courthouses remaining in the state and placed on the National Register of Historic Places in 1976, is most definitely showing signs of age. A maze of wooden beams supports the outside walls; inside there are cracks snaking their way from the bottom floor to the top.

With the structural demise of the old Sunbury School still fresh in his mind, Graham Twine, Chairman of the Gates County Board of Commissioners, said the time is now to take action to save the old courthouse. He penned a letter to his fellow board members, asking them to, “begin to think big, but realistically, as we strive to preserve our heritage while simultaneously advancing the quality of our citizen’s lives.”

“I don’t want to see the old courthouse turned into another Sunbury School,” Twine said as launched a discussion at the March 21 night meeting of the board. “That was one of the worst things to ever happen in Gates County, to let that school go down as it did.”

Twine said the options he saw as viable of what to do with the old courthouse included, in no particular order, deed the property to the Gates County Historical Society; demolish the building and use the space as a park or some other suitable purpose; or work with Preservation North Carolina to market the Old Courthouse much in the same way that organization is currently doing with the old Sunbury School.

Twine asked for public input on what to do with the old courthouse once the library moves into its new building.

Tom Horton said he thought turning it over to the Historical Society and letting them use it as a museum would be the correct avenue to take on this issue. He said space could also be provided there for the Gates County Chamber of Commerce.

Dan Lang said the longer the county waits to do something with this aging building, the more it will cost make repairs.

“My concern is have we already waited too long,” Lang observed.

“This building is a treasure,” she said. “It’s unique architectural style is only one of two still in use in our state. We have people from all over the United States to come into the building and remark on how unique it is. It would be sad to ride by and see nothing there. Our history would be gone.”

Linda Hofler said the old courthouse is not beyond the point of repair and it needs to be saved.

“Where else can you go and see the names of our citizens who went off to fight in the Civil War still written on the walls; you can in the old courthouse,” Hofler said. “There’s so much history there; I would hate to see it go to a wrecking ball.”

Chuck Brothers noted that the City of Suffolk transformed the old Nansemond County Courthouse, an aging structure that sat vacant for a number of years, into a visitor’s center.

“I challenge ya’ll to take a proactive approach to our old courthouse, turn it into a functional resource for the county,” Brothers suggested. “Let’s protect our heritage.”

Edith Seiling, a member of the Gates County Historical Society, said the organization has plans to complete the Thadd Eure Museum upstairs in the old courthouse. She added that the Historical Society has their own library in the building, future plans call for an effort to get those books in order.

“We looking forward to things happening in that building,” she said. “We keep plugging along, doing what we can. Financially we can’t afford the repairs that are needed.”

Another suggestion was transforming the old building into a cultural arts center.

Jordan mentioned the Marion Steadman Covington Foundation, an entity that could be used to gain grants for “brick and mortar.” He added that the National Trust for Historic Preservation could be another source for grant funding.

“We need to put forth some money to match these possible grants to help bring this property where it needs to be,” Jordan noted. “We need to put together a commission to oversee this and other historic properties and start moving forward to seek grants and start moving forward to set aside county funds to restore this property.”

Jordan said he was against turning over the property to other organizations. He said the Historical Society was already on record saying they don’t have the funds to restore the building.

Commissioner Johnny Hora said over the last several months it was quite apparent that many county taxpayers wanted the new library issue put to a vote to authorize the use of tax receipts to pay off any debt service to build a library.

“I’m all in favor of a new library; I’m not in favor of tearing the courthouse down,” Hora said. “We should have looked for grant money to build the new library so it would not have impacted the tax money of our citizens. Therefore, I bring a motion to the floor to allow the citizens of Gates County to vote on the issue of using taxpayer money to build a new library, as authorized by North Carolina General Stature 153a-149.”

That statute, in part, states that a county many levy a property tax of no greater than $1.50 per $100 of property value in order to pay for debt service, including establishing and maintaining a public library.

“We need a new library, but we also need to keep that old courthouse too,” Hora said. “If we can get some grant money to build one and take this money and ask you, the taxpayers, to put it into the old courthouse to preserve it would be a better course of action in my opinion.”

Jordan offered a second to Hora’s motion, asking his fellow board members to just not arbitrarily move forward with a loan to build a new library without first asking the tax-paying citizens their opinion.

Hora’s motion was defeated 3-2 with he and Jordan voting in favor of a library referendum with Twine, Jack Owens and Kenneth Jernigan casting “no” votes.

Returning to the issue of the disposition of the old courthouse, Jordan suggested that the county needs to allow the Historical Society an opportunity to bring suggestions to the commissioners of how to form a committee to study this issue.

“When we contact the right people, we’ll find out that this has been done before,” Jordan said. “People have ways to refurbish buildings of this nature and do it in a way without our means. We need to move forward on this.”

Jordan said he would work with the Historical Society on this issue.

“You can have a committee; they can do great research; what they need is the support of the people,” Owens stressed. “This will be an expensive project. We need to look for grants. There may be another avenue to take, one outside of grants and using tax money, one where you and I dig into our pockets and put towards this project. We need the public behind this and to support this project.”

County Manager Toby Chappell said another evaluation of the old courthouse was due this week by a structural engineer. That evaluation will result in cost estimates of repairs/renovations.

By Willie McLawhorn Sports Writer LASKER —With the first seven batters reaching base and a total of 16 batters coming... read more