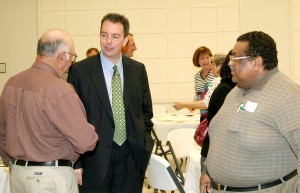 Dr. Marshall Stewart (second from left) chats with one of the attendees at Tuesday’s Farm-City Week banquet in Jackson. Staff Photo by Amanda VanDerBroek

On Tuesday evening, Northampton County Cooperative Extension recognized Farm-City Week with a banquet where Dr. Stewart served as the guest speakers. Farm-City is an event to bring rural and urban communities together to talk about agriculture.

According to 2009 agricultural statistics provided by Northampton Cooperative Extension, the county is home to 340 farms averaging 458 acres in size and boasts 155,576 total acres in farms. Total cash receipts the same year stood at more than $119 million with livestock, dairy and poultry accounting for more than $57 million while crops raked in excess of $51 million.

In his time before the audience, Stewart spoke about agriculture and what it means to the state.

“It doubles any other sector in North Carolina’s economy,” he said.

Despite its contribution to the economy, Stewart said there are still thousands of people around the state and country who have no connection to agriculture.

“We need to make sure we remind folks to think about that and show appreciation,” he said. “Agriculture is important, it’s our state’s number one industry and it still employs 18 to 19 percent of people in this state who are involved in ag-related careers some how.”

He noted the need for agriculture is not going anywhere.

“The future tells us that by 2030 the world demand for food will double,” he said. “And folks, we’re going to have to find new and innovative ways to farm.”

“It’s about making sure that I put in so that others can do well, it’s about investing,” he said. “It’s not just about equaling the scales, it’s about giving more so that next generation can give even more.”

He said young people in North Carolina do face challenges, specifically in education where roughly one-third of public school students who start the ninth grade do not graduate in four years.

“So when you think about our youth and you think about education, you need to be thinking how we can invest in that,” Stewart said. “And I’m not just talking about money, I’m talking about time, energy, spending time with young folks and being a mentor—doing those things that are necessary to ensure that young person has a chance.”

He added not every young person has a great parent at home or a person that understands them and it’s up to others to step in and be that for someone else.

AHOSKIE – The baby steps are beginning to add up. And soon too, will the wins. Hertford County High’s girls... read more