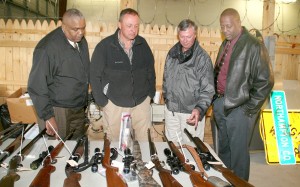 MURFREESBORO – Three local men and one woman face charges in four counties and one municipality following an alleged crime spree that involved at least 19 robberies and five cases of arson in two states.

Working closely with sheriff’s offices in Hertford and Bertie counties as well as Southampton County, Va., the Murfreesboro Police Department broke the case wide open on Wednesday, the biggest lead coming after MPD Patrol Officer Donald Cuff made a traffic stop on a ATV (All Terrain Vehicle) traveling on Main Street.

While the driver of that vehicle fled on foot and disappeared into a wooded area, Cuff recognized the man.

The ATV was left abandoned and a subsequent investigation led MPD Captain Chris Sumner to discover it belonged to Pike Harrington of Ahoskie. It was stolen from the historic Harrington Lodge near Lewiston. That structure, built in 1956 and famous for hosting North Carolina Governors and Major League Baseball elite players during hunting outings, burned to the ground late Tuesday night. On Friday morning in Murfreesboro, Harrington, walking past several tables full of items seized on Thursday during a search of five homes in the Murfreesboro area, was able to identify some as his personal property.

Arrested on Thursday for the alleged crime spree were:

Lionel A. Walden, 21, Conway; he faces 23 charges, most felony counts, to include breaking-and-entering (B&E), larceny of firearms (9 counts), possession of firearms (4 counts) and possession of a firearm by a felon. His bond was set at $1.3 million.

Antonio L. Holley, 22, of Mapleton Road, Murfreesboro; charged with possession of stolen firearms (4 counts) and possession of a firearm by a felon. Bond was set at $275,000.

Meanwhile, warrants have been issued for the arrest of another suspect in this crime spree – 22-year-old Japree Lortez Brooks of 122 Spring Branch Road, Murfreesboro. He is described as a black male, standing 6’ tall and weighing 200 pounds. MPD Chief Darrell Rowe said Brooks is believed to be armed with either a .357 magnum or a .40 caliber pistol. With an extensive criminal history, Rowe said Brooks is to be considered a dangerous suspect.

Other charges are pending from the Hertford, Bertie, Northampton and Southampton County sheriff offices, including arson, breaking and entering and larceny. Arson cases are currently under investigation at the Harrington Lodge, a residence at the Rhodes community (also in Bertie County), at a pair of dwellings in Hertford County (Beaver Dam Road and Log Cabin Road) and in Boykins, Va.

All were arrested at a residence located at 1200 East Main Street, Murfreesboro. Law enforcement officers blocked the street near that residence prior to entering the home.

“We were fairly certain that there were firearms inside that residence so we closed off the street to protect our citizens,” Rowe said, adding that all four suspects were taken into custody without incident.

That residence was one of five searched by law enforcement officers on Thursday (two in Murfreesboro; three in Mapleton). Numerous items were seized and cataloged for evidence. Rowe said due to the high number of B&E/larceny cases, several victims were contacted and arrived in Murfreesboro on Friday in an effort to identify the personal property.

Among those victims were Harrington and Leon Bolton of Burnt Reed Road in Boykins, Va. Both men suffered much more than losing a few valuables as each saw years of hard work and sweat go up in flames.

“There were so many of my family’s memories there, collected over a number of years, and now they’re gone, up in smoke,” said Harrington who added he was informed Wednesday morning that the lodge had burned to the ground. “It’s so sad. We could have replaced the stolen items…you can’t replace those memories.”

Personally, Harrington said he had stored his children’s (now grown) first bicycles, report cards and other treasured memories at the lodge. There were also hundreds of photos detailing all the famous deer hunts there and other activities hosted by his now late father, State Senator J.J. “Monk” Harrington.

“It’s been a very trying two weeks,” said Bolton whose home was torched March 10 after thieves allegedly made off with guns, coins, jewelry and computers. “It is gratifying that I can get some of my possessions back. But they’re just possessions, I not going to weep over those too much; my family is safe and that’s what counts.”

Bolton added that he was appreciative of the efforts of the Murfreesboro Police and the Hertford and Southampton County sheriff’s offices.

“They went over and beyond what I expected,” he said. “I can however bring a whole new perspective to people who think their possessions are safe. I went out yesterday and purchased a very large safety deposit box to keep the important things that were recovered. The next safe I buy will take three men to move. It will be bolted to the floor and it will be fireproof. I’ve learned a lot of very, very difficult lessons.”

Even in his loss, Harrington praised the work of all the local law enforcement agencies involved in quickly solving this crime and making the arrests.

“I didn’t know all these law enforcement people from different counties worked so well together,” Harrington said. “If I had a say in this they would all get a raise.”

“We work together as one,” Holley said. “I’m sad for those who lost residences and memories in these crimes.”

“This shows how different law enforcement agencies can cross county lines and state lines to come together to solve crimes,” Vaughan noted. “Criminals have no boundaries and neither do we. I’m glad we were able to solve these crimes, but at the same time you have to feel for those were suffered losses, especially losing their homes.

“It’s sad to work so hard and then come home and find all your possessions, including your home, gone,” Sheriff Vaughan added.

Holley said he believed the arsons were committed for two reasons – one, to cover up any evidence the suspects may have left behind and; two, a victim could not tell if anything was stolen if the dwelling was burned to the ground.

Sherriff Holley advised Bertie County residents if they experienced a recent break-in on their property and has yet to report it to please come to the Bertie Sheriff’s Office.

It was the latter that initially led Rowe and his officers on an effort to crack the case. Rowe said a coin/jewelry buyer in Murfreesboro turns in a report on those selling such items at the store.

“A red flag was raised when we discovered that silver bars and rare silver coins were sold to that dealer,” Rowe said. “Upon learning those same type items were stolen from the home over in Boykins that was burned, we contacted the Southampton County Sheriff’s Office and began working with Lt. Jimmy Ricks. As a matter of fact, Capt. Sumner and Lt. Ricks were on their way to Tarboro on Wednesday (where the dealer had sold the silver) when Patrolman Cuff made the stop of the ATV on Main Street. Once we learned the ATV was stolen from a suspicious fire in Bertie County, we begin putting all the pieces together.”

Rowe continued, “If not for the experience and intuition of Captain Sumner and the efforts of Patrolman Donald Cuff, this case would not have broken open at this point. We can’t say how many more breaking and enterings or arsons may have occurred. Lives may have been in jeopardy. My officers have worked non-stop, side by side with the sheriff’s departments over the past 48 hours in an effort to apprehend these suspects and stop this, what has become an unbelievable spree of destruction. The ability for all these agencies, including the FBI, to work together has brought us to where we are now.”

“We work well with the agencies here in ‘Carolina, the Murfreesboro PD and the Hertford County Sheriff; they’re some fine law enforcement people,” said Lt. Ricks. “I know all of these guys personally and worked with them over the years. They’re all a pleasure to work with.”

Rowe said the investigation continues and other arrests are pending.

Dr. Marshall Stewart (second from left) chats with one of the attendees at Tuesday’s Farm-City Week banquet in Jackson. Staff... read more