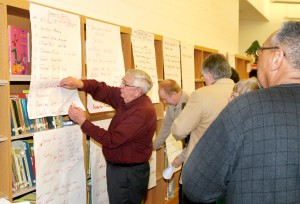 One of the participants in last week’s “Growing Gates” workshop affixes a dot adjacent to one of the ideas he sees as a priority for economic development in the county. Staff Photo by Cal Bryant

GATESVILLE – You get what you ask for.

North Carolina State University School of Design officials requested a list of economic development priorities from a large group of Gates County stakeholders here last week. The Raleigh-based group left Gatesville with plenty of ideas to work with as they continue in an effort to assist the county in planning for the future.

Round two of the “Growing Gates” Economic Development Community Strategic Visioning workshop was conducted Thursday evening at Gatesville Elementary School where a group of 40-plus local citizens filled up page after page of ideas for the NCSU group to work on.

Thursday’s workshop followed one held on Jan. 25 at the Merchants Millpond Visitor Center where the NCSU School of Design team initially met with county citizens to document Gates County’s strengths and weaknesses as they relate to economic development. Armed with that documentation, the NCSU team will identity possible economic development strategies for the county.

Last week’s meeting was all about putting the county’s development priorities in order.

“It’s all about marketing and branding,” said Jay Tomlinson, Research Associate Professor of Landscape Architecture at the NCSU School of Design. “We need to market Gates County so people will want to come live here; businesses will want to locate here. We need to draw ideas from you to help market this county.”

Tomlinson also looked at the county’s current logo, used on signage within the local area, as well as the county’s motto – “Where the good life begins.”

“What identifies Gates County,” Tomlinson asked. “When we come from Raleigh, mostly we think about Merchants Millpond as one of those identifiers.”

Others, according to Tomlinson, were shown in photos…the Confederate War Memorial in downtown Gatesville, the old courthouse, and a quilt in the new courthouse that traces life in the county.

He said the shape design of the county’s logo, now circular, needs rethinking.

“Most people feel connected to that (circular) style,” he said. “Unless the type size on the sign is fairly large, it’s extremely hard to read from any distance. I would suggest breaking away from circular logos.”

Tomlinson added that the use of attractive landscaping techniques are also appealing to the public traveling within the county.

Way finding signs (brief descriptions and directions) are another plus, driving traffic to the county’s most popular sites.

Questions/ideas posed to those attending the meeting included:

What are the community symbols or images that represent Gates County?

What are the historic elements of Gates County and how can they be used in any type of marketing, branding or signage?

How does regional planning fit into the scope of growing Gates County? Future parks/expansion of existing parks, walking trails along waterways or greenways were given as examples of regional planning.

Does the county need a festival to celebrate its proud heritage?

Do you want to develop the county’s designated bike routes by having bike lanes installed?

Need for more boating access sites within the county.

Does Gates County need to improve its storm water management?

Can you transform old structures within the county into useful buildings?

Look at the possibility of mixing residential development with a commercial core.

Does the county need more restaurants; if so, where would they be located?

How can the county develop more shopping opportunities?

What’s the best way to preserve more of the county’s historic structures?

Tomlinson then asked the participants to break up into three groups to answer the aforementioned questions or take into consideration some of the suggestions. Those ideas were recorded onto large sheets of paper that were all placed on display at the end of the meeting. Each participant was given three “sticky dots.” They were placed next to the three ideas each person saw as a top priority.

The NCSU team will now go to work to disseminate all that information and bring back their findings at an April 20 meeting in the county. The location of that next meeting will be announced at a later date.

The two workshops to date were made possible by a grant from NC State University through its Office of Extension, Engagement and Economic Development and supported by the Gates County Board of Commissioners.