They’re heading to different places on the national stage, but they both call the same local town as  home.

During the coming days both Jessica Breland (Bertie High School Class of 2006) and Kent Bazemore (BHS Class of 2007) will each have the opportunity to play in the National Collegiate Athletic Association National Championship Basketball tournament.

While the two will be traveling to different parts of the country for their experience, they are both natives of Kelford and played prep basketball at Bertie High. 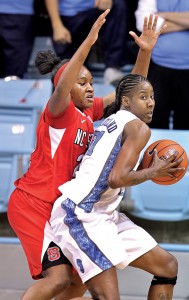 Both players have also excelled since moving on the collegiate level. Bazemore was named the 2011 Best Defensive Player in the Colonial Athletic Association. He was also Second Team All-CAA and was named to the All-Tournament Team.

Breland came back after a year off while being treated for Hodgkins Lymphoma. Her senior season was a standout effort that included an outstanding performance in the Atlantic Coast Conference Tournament.

Old Dominion finished second in the CAA during the regular season, but rolled over Virginia Commonwealth (another tournament-bound team) to secure the CAA tournament title and an automatic bid to the “Big Dance.”

Sunday, Bazemore was one of the Old Dominion players who was waiting to see where his team would go, but he said he wasn’t stressing about it.

“Our coach (Blaine Taylor) does a great job of not letting us get involved with ESPN and what people are saying,” Bazemore said. “We have to play no matter what seed we are.” 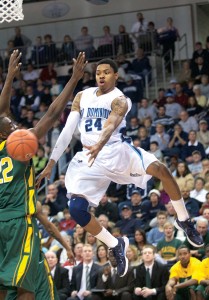 He said after the seeding, a number nine ranking in the Southeast bracket, the team was disappointed at first, but got over it quickly.

“Once we found out, we were a little disappointed,” Bazemore said. “Still, that’s their job to do stuff like that (seeding). It doesn’t matter because we have to go out there and play regardless.”

Bazemore and Old Dominion will square off with Butler in the opening round of the NCAA tournament at 12:40 p.m. today (Thursday). Butler finished as the national runner-up in last year’s tournament.

Breland, whose team finished sixth in the regular season Atlantic Coast Conference standings, had one of the best tournaments of her career and led the Tarheels to the finals of the annual ACC event last week.

That performance along with a Top-20 national ranking were more than enough to qualify the Tarheels for another trip to the NCAA tournament. Monday, Breland and her teammates found out they were a number five seed in the event.

They will meet Western Athletic Conference champion Fresno State in the Spokane Region of the tournament at 4 p.m. Saturday.

“We’re ready to get the tournament started,” Breland said. “Seeing our name up there, it lets you set a roadmap in your mind, so you know who you’re playing and you can start preparing mentally.

“We don’t know much about Fresno State yet, but we know we’re going to go out there and play how we play, which is to play Carolina basketball.”

While both are playing on the grandest stage of college basketball, the ones who helped train them are pleased to see them doing so well.

“It’s especially sweet to see her doing so well because she’s just like my daughter,” Lyons said. “I raised her for four years in high school.

“To see her now on that level is a special moment,” Lyons continued. “I’ve already called her and told her to have a great game and that I wish was there with her.”

Lyons said Breland will not only do well in the NCAA tournament, but much further.

“She’s going to play well in the tournament and then she’s going on to the WNBA (Women’s National Basketball Association) and do well at that level.”

Bazemore had a pair of coaches at Bertie as his teams were led by both Coach Tony Hoggard and Coach Calvin Moore. He said he learned from both of those men.

“I learned to play with pride and never take plays off,” Bazemore said. “One thing Coach Hoggard and Coach Moore used to tell me was not to take plays off. Back then I didn’t know what they meant, but now I know every possession counts.

Both Moore and Hoggard said they were proud to see Bazemore doing well.

“He has always been the epitome of a student-athlete,” Moore said. “He embodies what one should be.”

The coach said he was proud to see Bazemore have national success, but continue to hold onto his small town roots.

“Sometimes when kids get into big-time college athletics they forget where and how they grew up, but that hasn’t happened to Kent,” Moore said.

He also said Bazemore was a player that would get people’s attention.

“He brings the spectacular,” Moore said. “He will get people out of their seats.”

Hoggard agreed that Bazemore had remained true to his roots.

“Kent is one of the reasons we do what we do in education,” Hoggard said. “You don’t save all of them, but when you have students do well and they come back and tell you they appreciate what you did and they are following the advice you gave them, it means a lot.”

Hoggard said Bazemore had been even better than he thought.

“I knew he had the potential to be good, but I didn’t know he would rise to the level he has,” Hoggard said.

The nation will get an opportunity this week to see the level of play of both Bazemore and Breland and while they do – their hometown will be watching.