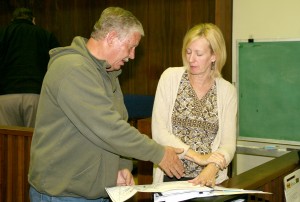 Kenneth Jernigan, Vice-Chairman of the Gates County Board of Commissioners, discusses plans for the new Gates County Public Library with Katherine Peele, representing LS3P, a Raleigh-based architectural firm that will design the new facility. Staff Photo by Cal Bryant

GATESVILLE – Before an architect places pen to paper, the design vision of the new Gates County Public Library lies with the citizens of the county.

Such was the purpose of a “Vision” meeting held here last week at the Gates County Courthouse, one hosted by LS3P Associates, LTD of Raleigh, the architectural firm chosen to design the new library.

Katherine Peele and Stephanie Garner represented LS3P at the meeting.

“That’s a number that’s been floated around,” Peele said. “We really have to look at where that stands with the budget. We will begin to put some numbers together for the commissioners to take a look at.”

Peele said the going rate for a library this size is in the neighborhood of $150 per square foot.

“This is still a great time to build with competitive construction prices,” she said. “The only negative variable right now is the price of gas.”

In the meantime, however, Peele said the process leading up to construction is what her firm was hired to perform.

First, she said, was site selection. That was done by working with a civil engineer for the past couple of months evaluating three separate sites.

“We looked at those sites in the Gatesville area,” Peele said. “The site at the (planned) Merchant’s Commerce Center (across from Gates County High School) really rose to the top (of the list) because the developer will be providing both water and sewer, which is a big deal. Many of the sites we looked at did not have this.

“Plus, the developer is donating this property to the county,” Peele added. “From a financial prospective this site was a good deal.”

Peele also noted this site will place the library in a more centralized location.

“We hope you’ll get more patrons coming because it will be more convenient to come and use the library,” Peele said.

The developer will be responsible for placing an access road to the library.

According to Gates County Manager Toby Chappell, the property, up to three acres, was offered to the county by Kim Old and his business partners, landowners and developers of the Merchant’s Commerce Center.

In addition to that particular site, the Commissioners studied two other properties – one parcel located just north of the EIC Building on NC 137 and a tract of land on U.S. 158 Business east of Gatesville.

As far as the current library (housed in the 175-year-old Gates County Courthouse), Peele said there were some major issues there, including structural deterioration, mold/mildew and lack of space.

“It doesn’t work from a functionality point at all,” Peele stressed.

As far as the direction LS3P is taking at this point, Peele said that included the community vision meeting and working with the library staff and its board of directors to understand the square footage needs and the programs that need to be provided.

“Once we get through all these steps, we’ll be coming back to the Commissioners for concept design,” Peele noted.

With a modern library, Peele said it was necessary to make the entryway warm and inviting; place the circulation desk in a high traffic area; and allowing the staff to have a clear view of all portions of the building (for security reasons).

“What we want to do with your input is design a facility that will feel like a part of your community,” Peele said.

County citizens in attendance at the vision meeting then shared their ideas, which were recorded on paper for the architects. Those suggestions were as follows:

The use of ‘green’ technology – a well-insulated facility with natural lighting, high-efficiency heating/cooling unit and a metal roof;

Functionality…cost effective while being aesthetically pleasing;

Keeping an eye on the future of electronic communications…building it to the point where if technology changes, the building can be re-wired without a lot of messy renovations;

Build it with upkeep (maintenance, cost of utilities) in mind;

Design the building for possible expansion in the future;

Ensure that Wi-Fi is available;

Work with library staff on selection of furniture;

Keep in mind the flavor of Gates County in the architectural design; no need for an ultra-modern design;

Build with plenty of storage space; and

Make sure it’s handicapped accessible (that element is required by building codes).

One citizen expressed concern that the new library was not located in the town of Gatesville. Chappell said no property there was offered or made available for the county to purchase. He added the county-owned land adjacent to the DSS building was not suitable for building construction.

Another citizen noted the air quality at the selected site, especially in the summer months, due a nearby swine operation.

“How healthy is that,” he asked. “Who would want to smell that, other than the farmer who is reaping the profits from that farm operations. I think it would be advisable to take soil samples and air samples there before this (plan) becomes locked in stone to make sure this is area is indeed safe.”

As far as the advancement of e-readers, which was a subject matter brought up by two citizens, Peele said there had been a lot of debate about that topic.

“We’re still finding a lot of places are still building new libraries and many are as popular as ever, if not more so,” she stressed. “There are more resources, other media available at the library today; you can access the internet, you can check out a DVD, you can use it for continuing education purposes. I hope that books will never go away.”

Gary Hoyle, Director of the Albemarle Regional Library System of which Gates County is a member, said smaller, rural libraries are not yet at the point of offering e-books to its cliental.

“It’s almost like by the time the technology gets out there, it’s already dated,” Hoyle said. “There’s something always newer and better coming along.”

Hoyle said the State Library of North Carolina will sponsor a training session in the future that will demonstrate all, “these new-fangled tools to our staff.”

To ensure the design steps are followed as requested, Peele said the county commissioners will approve each step of the process.

“Our next step beyond this meeting is we’ll be working to develop a final program document, which will be a list of all the square footages and then we’ll start putting some concepts together to bring back to the library staff, the library board and the Commissioners,” Peele said.

As far as a time frame is concerned, Peele said the design phase will hopefully go quickly with construction beginning perhaps as early as this fall. The construction process is expected to take six-to-eight months.