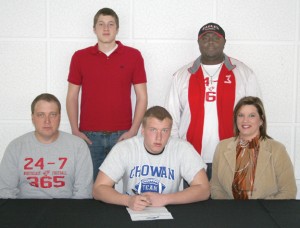 Buddy Brown (seated, center) committed to play at Chowan University Tuesday. He was joined by (seated on either side) his parents, David and Rhonda Brown. In the back are his brother, Joseph (left) and Northeast Head Football Coach Collin Sneed.

LASKER – One of the area’s better defensive players will be staying local when he takes to the college gridiron.

Tuesday morning, Northeast Academy standout Buddy Brown committed to play collegiately at Chowan University in Murfreesboro. There, Brown will join Chris Lyons of Roanoke Rapids as local recruits for the Hawks in 2011.

“Chowan stood out among the places I was choosing from,” Brown said. “I believe there is a good opportunity to win a CIAA championship in the next three years.

“Some of the coaches I talked to seemed used to losing,” he added. “Chowan asked if I wanted to be on a winning team.”

Playing for a winner is something Brown is accustomed to, having made the playoffs at Northeast Academy in every year of his varsity career.

From his position as a linebacker, Brown helped lead the Eagles in their defensive attack. Such was his excellent play that he was named to the All-Purpose Defense slot on the All-Roanoke-Chowan Football Team.

During his time with the Eagles, Brown said he had learned some skills that he believed would benefit him when he plays in Murfreesboro next season.

“I think I understand hard work, have  a strong work ethic and know what it takes to be part of a winning team,” he said. “I’ve learned those things at Northeast and I think they will be beneficial.”

Another thing he has learned during his time in Lasker is the importance of working hard in the classroom as well as on the football field.

“I think the most important thing I’ve learned is how to be an athlete and still excel in the classroom,” he said.

Eagles’ Head Coach Collin Sneed said Brown has been an outstanding player at Northeast who would undoubtedly be a benefit to Chowan.

“I think Buddy will do really well at Chowan,” Sneed said. “I’m happy he picked that school because they are very family-oriented.

“On the football side of things, Chowan has a football team that is getting better every year,” Sneed added. “The CIAA is a good league and Chowan keeps making strides up the ladder each year.”

Brown will begin playing for the Hawks this fall.