Right place at the right time 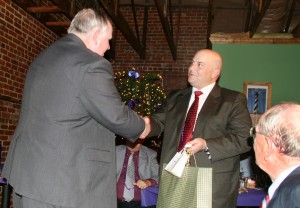 John Ward II (right) accepts a gift from the Murfreesboro Chamber of Commerce, as presented by Ray Felton (left), after serving as the banquet speaker on Monday night. Staff Photo by Cal Bryant

MURFREESBORO – The right place at the right time….simply stated, that’s what drove a small town country boy from Gates County to national acclaim in the fast-paced world of electronic media.

John A. Ward II chronicled his life’s story into a 30-minute presentation here Monday night where he was the featured guest at the 59th annual Murfreesboro Chamber of Commerce banquet.

While Ward, a 1987 graduate of Gates County High School, has seen his life take many twists and turns, it was a valuable lesson learned as a teenager that may have proved as the turning point.

He said his career aspirations after high school were, in no particular order, pharmacy, accounting and radio/TV/film. He opted to attend UNC-Chapel Hill, but apparently was a bit lackluster over making plans to prepare for such a big transition from tiny Gates County to a major university. He attended orientation at UNC for 13 hours, discovering it wasn’t the place he wanted to be and returned home.

That led him to a year attending Chowan College (now Chowan University) before transferring to NC State University where he graduated in 1991 with a degree in radio/TV/film.

“I did a lot of growing up at Chowan; I got my act together,” Ward remembered.

From there, Ward found a lifelong mentor in another Gates County native, TV/movie producer Beth Polson. He moved to Los Angeles.

“I would not be here tonight if it were not for her,” Ward said. “She gave me my first job in this industry, a researcher for the Polson Company.”

His first big break came in 1993 when he was hired by a fledging new TV network – Fox.

“I was extremely fortunate to latch on with Fox,” Ward said.

While with Fox, Ward branched out to perform some freelance work, first with Pat O’Brien, formerly with CBS Sports.

That sports connection led Ward to his next big step up the ladder – the National Football League, of which Fox acquired a portion of the broadcast rights. It was O’Brien’s recommendation of Ward to a Fox Sports producer that sent him to the next level.

“That was in July of 1994 and we were actually building our studio set in an old building in Hollywood and rehearsing the show at the same time with Terry Bradshaw and Howie Long,” Ward said.

Not too long after Fox launched its NFL coverage, Ward formed a bond with David Hill, the right-hand man of legendary Fox founder and owner Rupert Murdock.

“David and I were kindred spirits…he grew up on a farm in rural Australia and I on a rural farm in Gates County,” Ward noted. “He was a big motivator.”

In 2000, Hill gave Ward his first big test, sending him to England to oversee the start-up of NFL Europe.

“Those two years overseas were the most stressful of my life, but it turned out as the best thing ever for my professional career,” Ward said. “Living abroad is the best thing that can happen, it teaches you different cultures and how to live with different people.”

Upon his return to the United States, Hill sent Ward out on another project, one that would land him back in the Tar Heel State.

“Fox was just starting its relationship with NASCAR and wanted to develop a NASCAR channel based in Charlotte,” Ward recalled. “Initially, I turned it down, but David has a way to convince you. Ten months later, the SPEED Channel was up and running.”

In 2004, Ward started Fuel TV, another Fox Cable Channel that featured action sports as its main content, including Surfing, Wakeboarding, and Skateboarding.  That same year he worked on the road as a Technical Producer for NFL coverage, working with Joe Buck, Troy Aikman and Chris Collingsworth. He went on to work three Super Bowls, 10 World Series, four Stanley Cup finals, and multiple Daytona 500s during his 12 years with Fox Sports where he moved from Broadcast Associate to Production Supervisor to Director of Production.

Ward said his career at Fox, where he won 11 Emmy Awards for work on NFL, MLB and NASCAR events, was highlighted by three major events that he witnessed on location…a baseball game in 1998 when Mark McGuire broke Roger Maris’ single-season home run record; the 2001 Daytona 500 where Dale Earnhardt died on a last-lap crash; and the halftime show of the first Super Bowl played after the 9-11 attacks on America, one where the names of all victims of that tragic day were displayed on a curtain while U2 played on stage.

When Murdock purchased DIRECTV, Inc. in 2004, one of the most logical choices to move that new acquisition forward was Ward. His work there began in 2005 to start-up an original entertainment division.

“The idea was for me to get everything set-up and then leave after two years,” Ward said. “We built our HD (High Definition) studios to start produce our programming, which included NFL Sunday Ticket and the 101 Network, a 24/7 entertainment channel.”

Eventually, Murdock opted to get out of DIRECTV, but Ward remained.

“I felt that I had proven myself up until this point of my career and just wondered if there were any more challenges to come,” Ward stated. “It’s a great company and I love it there. I’m happy I decided to stay with DIRECTV.”

“What I hear a lot when I talk to people about having grown up in a small area is that I’m constantly reminded about how lucky I was to have that type of upbringing,” Ward said as he closed his presentation. “I wouldn’t trade growing up in Gates County for anything. The core values and beliefs instilled in you from an early age can carry you throughout life. It’s kind of the same way in the business world, you treat people around you right and they will remember that. If you carry yourself that way, you’ll never go wrong.”

The annual banquet, held at John’s Seafood and Steaks, also featured the presentation of three awards.

“We are very honored to receive this award; it just makes us want to work harder, given the energy and good health,” said Mrs. Bunch who, along with her husband, were among the founders of what is now the largest event in all of northeastern North Carolina, the Watermelon Festival.

Brunet Parker, the founder and advisor of the local and state acclaimed Future Business Leaders of America Chapter at Hertford County Middle School, was recognized as the winner of the 2011 Front Page Award, an honor bestowed annually by the Roanoke-Chowan News-Herald.

“I would first like to thank God for this honor,” Parker said. “I was born and raised here, but I never thought I would be achieving something from the Murfreesboro Chamber of Commerce. “Thank you so much for this recognition. This is a great honor.”

The annual Chamber of Commerce Award, presented by outgoing President Dell Aycock, was given to Bob Hill Sr., a community and Hertford County leader who founded Moonlight Manufacturing Company, which later became Hill Enterprises. Accepting the award was his son, Lloyd Hill.

Bears off to quick start