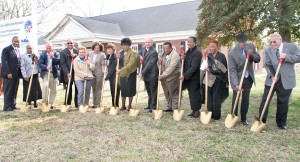 Officials with the Northampton Memorial Library joined with the county commissioners and the Town of Jackson on Thursday to break ground on an expansion project. Staff Photo by Cal Bryant

JACKSON – The grounds of the Northampton Memorial Library buzzed with activity here Thursday.

As traffic rumbled by along the always busy Jefferson Street (US 158), library staff, joined by county officials and others, formally broke ground on a half-million-dollar project that will renovate and expand the building, first opened in the early 1970’s.

Meanwhile, the back and (west) side yards of the library were manned by construction crews as the work on the project is underway.

That project – wholly funded by grants from the Golden LEAF Foundation ($433,902) and the U.S. Department of Agriculture Rural Development ($108,000) – will add 2,596 square feet to the current library with the construction of a computer room, complete with 18 new computers and accessories, and a multipurpose room. Additionally, the inside of the current library will be renovated with new restrooms as well as a kitchen area. Eighteen new parking spaces will be added.

Funded without the use of Northampton County taxpayer dollars, the project also includes energy efficient items – solar panels to heat the water for the restrooms and wind turbines that will provide the electricity needed for outside lighting.

“Today marks both an end and a beginning to our renovations and expansion project,” said Northampton Memorial Library Branch Manager Barbara Davis as she opened the groundbreaking ceremony. “The design and development stage was supported by so many gathered here today. That part of this project has ended and today marks the beginning of the construction phase.”

Thursday’s event was attended by the county’s ranking officials…Manager Wayne Jenkins and the Board of Commissioners – Chairwoman Fannie Greene, Vice-Chairman James E. Hester, Robert Carter, Virginia Spruill and Chester Deloatch. Jackson Mayor Jim Gossip also took part in the festivities, as did Gary Hoyle, Director of the Albemarle Regional Library system, a representative from USDA Rural Development and supervisors from A.R. Chesson Company, the firm responsible for the construction process. Surapon Sujjavanich, who performed the project’s architectural services, was also in attendance.

“I say thank you to all who worked so hard on this project from the beginning,” Davis said. “To all who dared to dream of this renovation and expansion project have now seen that dream become a reality.”

“This came to be on our watch,” said Shirley Fields, Chairwoman of the Northampton Memorial Library Board of Trustees. “We, the members of the Trustee Board, are elated, ecstatic, overjoyed, thrilled, delighted, excited and floating on cloud nine.”

Fields mentioned the work of the Trustees involved in a project of this magnitude, a group that also includes Wanda Taylor, Nancy Flythe, Frankie Harvey, Pat Maddrey and Steve Jackson.

“So many gave of themselves unselfishly of their time and efforts to get us to this ground breaking ceremony today,” Fields noted. “Grant money doesn’t fall from the sky; you have to have go-getters, and that’s what happened here; we had people that sought support from USDA and Golden LEAF Foundation. The citizens of Northampton County will reap the benefits of that hard work.”

Fields stressed that the construction project, once completed in four months, will lead to a better working environment for the library staff as well as more public access computers. She said the addition of a multi-purpose room will allow for community-based meetings to take place without interrupting the normal offerings of the library environment and praised the design plan that included the additional parking spaces.

“This is a great day for Northampton County citizens,” said Greene. “We seem to be saying that a lot lately and that’s exciting because we are growing. Today, with this ground breaking, we are celebrating a major, symbolic move forward.”

Greene thanked the Northampton Memorial Library team for their long-standing tradition of providing a valuable service to the county citizens.

Hester said there were 4,047 Northampton citizens registered to use the Northampton library, adding there were 214 children enrolled in the library’s 2010 Summer Reading Program.

“Our citizens are our greatest asset,” Hester stressed. “We, the commissioners, are always attempting to give them avenues to expand their potential. The building of the (Northampton) Cultural and Wellness Center provided a place to build healthy bodies. Now, with the expansion of this library, we are providing another learning tool for the young and the old.”

“On behalf of the Jackson Town Board of Commissioners I would like to congratulate you on the ground breaking of this wonderful addition to this library,” Mayor Gossip said. “The people of Jackson and the surrounding area are very, very excited with respect to this expansion project.”

Like Hester, Gossip said public libraries are vital to the growth and development of communities.

“They are essential to our democracy, our educational institutions, economic development initiatives and life-long learning,” he said. “They are the people’s university because of their availability to all, regardless of age, skill set or economic circumstances. We live in an information driven society and there’s no question that public libraries are part of that phenomenon.”

Gossip said he recently read that, according to 2009 numbers, 77 million people in the United States utilized public libraries to gain internet access. He noted that number represented one-third of the U.S. population.

“Barbara and her staff do a terrific job with respect to the day-to-day operation of this library,” Gossip stated. “But they also conduct some very outstanding special programs here. I can tell you that these programs are vital to the educational and cultural aspirations of our county citizens. I have no doubt that as this addition comes to fruition that these programs, as well as the overall operation of this library, will become even better.”

“I consider myself a man of faith, so I want to thank God for this day, for everything that has been done and will be done,” said Northampton Library Trustee Stephen D. Jackson as he closed the remarks portion of the ceremony. “This project started out three to four years ago with a vision of expanding our parking lot. God told me just to wait, and, finally, this project came to be. Now look at God’s work. I’m so grateful to all that played a part in making this happen. This addition will make our lives richer and more fulfilling, now and for generations to come.”

Deacon Russell Boone offered a prayer of blessing the land used for the library addition prior to library and county officials formally breaking ground on the project, which is already underway.

There’s an old saying….if you don’t like the weather, give it 24 hours, it will change. That’s so true, especially... read more