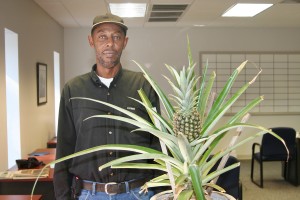 WINTON — It’s not everyday that you see a pineapple plant growing in northeast North Carolina, much less one producing a fruit in the middle of winter.

However, Joe Bowser of Winton managed to do both.

Recently, Bowser showed off the plant he cultivated to the Roanoke-Chowan News-Herald. The plant is now growing a large, six-inch fruit.

“I bought a pineapple, cut the top off, put it in dirt and it started growing,” he said.

Bowser said he got the idea to grow one after he saw his niece’s pineapple plant.

That was approximately two years ago and over that time period Bowser has fertilized the plant regularly with Miracle Grow. He also brought the plant in during winter and placed it outdoors in the summer. Six months ago, Bowser noticed a small bud on the plant, which has now developed into a pineapple fruit.

As for the fate of the pineapple, Bowser said he plans to eat it, but save the top as he wants to grow another plant.