No glitz, no glamour…just fix it 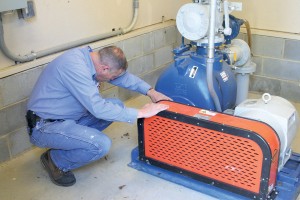 Billy Deanes daily rounds as a Maintenance Technician includes examining the various lift stations around town. He is a 17 year veteran of the Murfreesboro Public Works Department. Staff Photo by Amanda VanDerBroek

MURFREESBORO – There is really nothing ordinary about Billy Deanes’ office.

For starters he never knows where it will be from the time he walks into work at the Murfreesboro Public Works Department.

His office could be at an arbitrary street around town where a water main break needs to be patched, at one of the 15 lift stations where he’s checking the equipment or in his Public Works truck taking the latest drinking water sample to Raleigh.

As a Maintenance Technician for the department, Deanes makes sure all is right with the Murfreesboro water and sewer systems.

“I kind of do it all,” he said. “A maintenance technician makes sure everything is running.”

And if everything is not running, it’s up to Deanes and Public Works to get into the trenches and fix the problem.

“Most people look at it this way, when they turn on their (faucet) they’ve got water and when they flush their toilet they want that water to go away,” he said. “They take it for granted.”

On an average day, the Murfreesboro native arrives at work at 7 a.m. with the rest of his co-workers. Public Works Director Gene Byrd then hands out assignments, items and tasks that need to be completed. Deanes splits pump checks with another employee. Among his check list is chlorine level at the wells, various lift stations and the manholes in the system.

Once a month the town is required to pull water samples to check for bacteria. Those samples are taken to Raleigh to make sure the water is safe to consume.

While growing up he had an interest how things worked. Deanes spent much of his early years tearing things apart to learn how the internal mechanics operated.

It was a trait that ran in the family. Deanes’ father, Ted, worked repairing appliances.

“I kind of followed in his footsteps,” he said. “I worked with my dad on appliances in electric, heating and air. I was working for my father when Gene came and asked me to come work at Public Works.”

Deanes said he learned a lot from his father, not only in that trade, but also gained knowledge in how to care for others. The elder Deanes would always strive to treat everyone equal.

“Part of that rubbed off on me,” he said.

His father’s passion for the local volunteer fire department is another attribute Deanes inherited. Deanes comes from a line of fire chiefs which began with his grandfather.

Deanes himself was fire chief for Murfreesboro and is still involved with the fire department as well as EMS, which his mother was involved with, and he started at age 18.

Deanes said his involvement in volunteer public services is due to simply wanting to help people.

“It is to help people, if you could save one life, then it was worth it,” he said.

Perhaps it was that background in emergency services that prepared Deanes for the demanding job of Public Works.

This particular week is Deanes’ turn to be on call, which means he needs his handy town issued beeper close by and must be ready to report within 15 minutes at anytime of day or night. He rotates “on call” duties with three other co-workers.

“From the time they call us we have to answer within 15 minutes,” he said. “You’re limited on where you can go (on personal time).”

Deanes said he’s had those times when the job has called him out while he was sitting down to dinner with his family or from the comfort of his warm bed at night.

“The busiest time of the year has to be in the winter, after a hard freeze,” he said.

During that season, the department often receives calls about busted water pipes and sometimes water in houses. The issues often require public works staff to respond quickly and remember where the water main to the effected home is located.

Deanes agrees that his job is not exactly glamorous. It’s a job that requires long hours of dirty, physical work.

“Do you know what a wet well is?” he asked. “It’s sewage mixed with water.”

In these wet wells, Deanes often finds discarded items—most he rather not see while some leaves him wondering exactly where they came from.

“You’d be surprised what people flush down their toilets, from washrags to hypodermic needles to tampons and condoms,” he said.

The most unusual item Deanes found was a bowling pin, which left the crew scratching their heads.

“I still don’t know how that got in there,” he said.

Deanes said one positive of the job is that he continues to gain knowledge.

“It’s a learning job, you learn something everyday,” he said.

He also noted the job requires all of the staff to work as one, something he said is a reality at the department.

“We all work together—that’s what it’s all about teamwork” he said.

Give us a reason to smile

To the Editor: I have lived and worked in Bertie County my entire life. There is no place like home.... read more