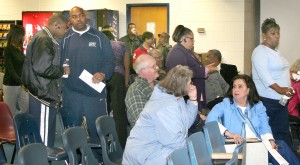 A crowd of more than 50 parents, students and Northampton County Schools employees gathered at the lecture room of Northampton County High School-East to hear about the financial crunch the school system is facing operating two high schools at either ends of the county as well as voice their opinions on the matter.

The public forum is the first of two that will take place in the county. Another will be held Thursday, Feb. 24 in the auditorium of Northampton County High School-West.

To begin the forum, Northampton County Schools Assistant Superintendent Phil Matthews presented the same report concerning future school operations that was given to Board of Education members at the beginning of the month.

Among the highlights in the report was the fact the school district was facing steady decreasing enrollment and the cut back of nearly $2 million in state funding.

Matthews said that though the state deficit now stands at $2.4 billion, $1 billion less than when he first presented the report, and Governor Beverly Perdue vowing she would try to keep teaching positions intact, how much in education that would be cut was still a “moving target.”

“As the legislature works and the governor works everything changes,” he said.

Matthews report also said with a single high school, the district would save more than $1.3 million in professional staff costs.

Northampton County Schools would also face an increase in transportation costs and students from the outer most parts of the county, both east and west, would be experiencing bus rides to school that would last anywhere from one hour and 50 minutes to more than two hours.

After the report was presented, parents, students and a former Board of Education member took to the podium to their opinions about consolidating the high schools.

Pete Umphlett, who has children attending Northampton County High School-East, said he was against the consolidation of the two high schools, noting several concerns.

Umphlett said he was worried about the rivalry between the two schools as well as the length of school bus rides for some students, which he believes will affect students’ ability to concentrate and learn.

“What’s money when the safety and security of children are involved,” he questioned.

He said the county had already suffered a loss of jobs and consolidating high schools would mean more job losses.

“I do not agree with this one bit,” he said.

Andre Rowe, who also has children who attend NCHS-East, wanted to know when the consolidation would take place.

Rowe is in favor of building a centrally located high school.

She said the teachers at East were accustomed to teaching classes with approximately 20 students.

“I love my teachers, what if they had a long night and have to come in the next morning to a classroom of 40 students,” she said.

Harris also questioned if the students sitting in the back of a large classroom would learn as much as those toward the front.

“I feel there are more cons than pros,” she said. “I feel like the consolidation of (high) schools should be a no.”

Andre Rowe Jr., a junior at East, voiced his support for a single high school, but urged school officials to be prepared and to take all things into study.

He noted that many of the students at East have been together since Kindergarten and he assumed it was the same at NCHS-West.

“I feel like all those things should be taken into consideration,” he said.

Former Board of Education member Charles Tyner asked school officials to make the best decision for the students in the school district.

“I thank the Board of Education for giving us the opportunity to speak tonight because in 1968 we didn’t have the chance,” he said. “I want you to eliminate any other (influences) of where your family or friends are in the county and base your decision on what’s best for the children.”

He noted the tough financial times in the state and county, but that he wanted to know where the board would get the funds to run a comprehensive 21st Century high school.

Tyner said if Northampton County Schools were to bring out the best in their students they would have to offer a wider array of classes and programs.

“I’m here today to tell you what we’re offering in Northampton County will not do for our children in 10 years,” he said. “Right now we’re operating for the average. We’re not taking our brightest kids to that point.”

He concluded by pleading with the Board to weigh the pros and cons and decide what is best for the children.

Northampton County Board of Education Vice Chair Marjorie Edwards thanked all those in attendance for coming. She said all of the questions posed to the board would be answered in the future and that the comments would be taken into consideration.

“This is a very tough time for all of us, no matter what seat you’re sitting in,” she concluded.

TERRA CEIA – Ridgecroft School jumped out to an early lead and never looked back. The varsity Rams held a... read more