EMTs stand between life and death 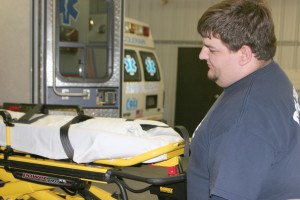 Colerain EMS Emergency Medical Technician Travis Jackson and those who serve like him must be prepared at all times when summoned for assistance. Staff Photo by Thadd White

COLERAIN – It’s a job with long hours and lots of stress, but it’s one you don’t do unless you love it.

Working as an Emergency Medical Technician has its drawbacks and they can be major – such as the death of a patient – but it also provides the opportunity to be the person standing in the gap between life and death.

That love for helping people is what drew Travis Jackson to the career and what keeps him coming back day after day.

“I feel like I get to really help people,” Jackson said. “It’s more fulfilling than most jobs you could have.

“The paycheck can’t be the reason you do it,” he added. “You’ll never be paid enough to watch someone die, but you have to feel like you’re doing what you can to help people in times of crisis.”

Jackson said he began thinking about working as an EMT when he was in high school.

“My granddad had a lot of heart problems and spent a lot of time at Norfolk General Hospital,” he explained. “When I was there visiting him, I would see Nightingale (medical service helicopter) come in and out. That’s what initially sparked my interest.”

His career path led other ways, but eventually things worked out for him to head back to that first choice.

“Circumstances gave me the opportunity to go back to it,” Jackson said. “So I took that chance.”

He enrolled in a class at Roanoke-Chowan Community College which allowed students to complete their class work to become an EMT in seven weeks rather than the normal three-month period.

“It really worked out well for me,” he said. “I feel like I did better because everything stays current in seven weeks. If you take a six-month class, what you learned in one month can be hazy by the time you reach the sixth month.”

Upon completing that work, Jackson began work with the Woodland EMS and the Colerain EMS. He spends most of that time now in Colerain.

All EMTs work long hours and Jackson is no exception. He begins work many times at 6 a.m. and stays until a 12 midnight.

“Long shifts are part of the job,” he said. “Anyone who works as an EMT will likely work at least 12-hour shift, that’s pretty standard.”

Upon arrival at work, Jackson begins his day working with another EMT to make sure the ambulances are prepared for any call they may receive.

“We have to do some things you would take for granted, like make sure the lights work and the vehicle is full of gas,” he said. “You also have to make sure you have everything you need in the way of equipment and patient care.”

Those things include all medications, oxygen and anything that may be needed on a call.

Some days are busy with numerous calls and others are more relaxed, but there is something to do regardless.

“We have to make sure the truck stays clean and keep our work areas clean, including the kitchen,” he said. “There’s also laundry to be done.”

While those things keep EMTs busy during down time, it is the time when the tone sounds and a call comes out that requires them to be ready and fully trained.

“They (Bertie dispatch) drop the tones and then the pager goes off, paging out Colerain Rescue and it’s time to go,” Jackson said.

In less than 90 seconds, Jackson and his partner are in the ambulance headed to whatever call may come in – from a motor vehicle accident to a diabetic incident.

It’s likely from the time they leave, they won’t be back in the building for an hour and a half.

“With us being a rural county, we have to drive 10 minutes a lot of times to get to the call and then it’s another 20 to the hospital,” he explained. “By the time you finish paperwork and return, it is more than likely going to take an hour and a half each time we roll.”

When the EMTs take to the road, they never know what they may find, but they often begin preparing immediately.

“If we know it is a serious call, often someone will be in the back getting supplies ready,” Jackson said. “That may mean CPR equipment or the defibrillator, whatever we know we’ll need.

“Some people like to prepare for what they are going to do and have an action plan,” he added. “I like to have an idea of the first steps, but I don’t want to get locked into one way of thinking.

“I think it’s important to have an idea of what to do, but be ready if you run into something different than you expect,” Jackson noted.

He said there have been several tough calls, but one of the toughest came during his volunteer hours with Askewville EMS.

“We were called to a home and found a person on the floor unconscious,” Jackson said. “He was dark red and almost purple from his chest up and we immediately began CPR.”

Because the victim was more than 400 pounds, it took additional people to remove him from the home and to get him into the ambulance. From there, Jackson provided the heart compressions for the entire ride to Bertie Memorial Hospital.

“CPR looks easy when you watch someone else do it,” he said. “Doing it for 10 to 15 minutes straight takes something out of you. I did it all the way to the hospital and continued until he was in the care of the hospital staff.

“When it was over, I was exhausted,” he said. “It was still an adrenaline rush to be there and do everything you can to help someone.”

Most of the calls Jackson answers are responses to those who have issues with diabetes or who have heart conditions.

“I’d say that those are the two calls that I’ve seen the most regularly,” he said.

Whatever the call, he knows that he enjoys the work he does.

“I like what I do,” he said. “I have thought about advancing to higher levels of EMT, but I enjoy what I do as well, so I haven’t made up my mind.

“I just know that at this point, I find my job enjoyable and a way to help my fellow man,” he added. “As a Christian person, there’s little more that I can ask for than for my career to be a way of making a positive influence on people.”