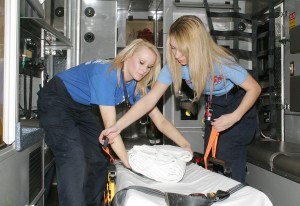 Gates County Rescue & EMS Junior members Victoria Meehan (left) and Ashlyn Pauley prepare one of the ambulances for its next call. The organization has expanded its services to now include non-emergency transportation. File Photo by Cal Bryant

GATESVILLE – As Gates County has grown in population, so has the number of calls seeking medical transportation.

Since its inception in 1964, Gates County Rescue & EMS has been providing the citizens and visitors of the county with emergency medical services. Some of those calls for help involved simple medical problems, but the local Rescue & EMS provider boasts of a roster of paid personnel and volunteers highly skilled to meet the challenge of providing advanced medical care.

“We are capable of bringing a mobile emergency room to your front door,” said Jack Boyce, EMS Chief.

Now, Gates County Rescue & EMS is offering another service to those in need… non-emergency transportation.

“As we enter 2011, residents will see and hear the department doing more than just responding to emergency incidents,” Boyce said. “In the fourth quarter of 2010, personnel started providing non-emergency ambulance transportation as part of routine operations.”

Those without the means of personal transportation can turn to Gates County Rescue & EMS to provide that service. They now have the ability to use Gates County ambulances for non-emergency trips such as physician/medical specialist appointments, dialysis treatments and outpatient procedures as well as transportation back home following discharge from a hospital.

“For years, the department has only been able to provide one staffed ambulance to cover countywide requests for EMS services,” Boyce noted. “With no hospital located within the county there was always the potential to have significant response delays to any further calls for service while that primary unit was transporting.”

As the county population increases, so does EMS call volume. Gates County has seen a 26.4 percent increase in population since 1990.

That growing population has led to an increased number of calls for Rescue & EMS assistance. As the call volume in the county has increased over the years, so has the expenses.

“Without additional funding, the organization has previously been unable to hire additional staff to provide the coverage that the citizens need in emergency situations,” Boyce observed. “The adding of non-emergency transports to every day operations supplements the income that is needed for more staff to accommodate a growing county.”

Boyce said the majority of organization’s funding comes from billing revenue that is supplemented by donations and fundraisers. All expansion thus far has been increased without raising taxpayer funding.

In order answer the expected emergency calls as well as requests for the newly created non-emergency transportation, Boyce said at least one additional unit is now available during the peak hours of the day to not only cover non-emergency trips, but also provide EMS coverage for patients having an emergency.

“Residents can now use the neighbors they have known and trusted since 1964 when ambulance transport is required, whether it be an emergency or scheduled trip to a medical provider,” Boyce said.

Those wishing to schedule non-emergency transportation can call the Gates County Rescue & EMS office at (252) 357-0388.