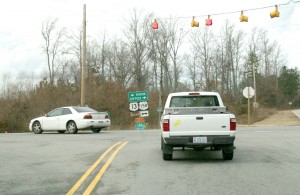 If DOT proceeds with its plans, direct left-hand turns off NC 137 onto US 13/158 in Gates County will be prohibited once the new four-lane highway is constructed. Staff Photo by Cal Bryant

GATESVILLE – It appears that the North Carolina Department of Transportation will proceed with a “superstreet” design at intersections along the planned four-laning of US 13/US 158 in Gates County.

That design doesn’t sit too well with Dan Bazemore of Eure.

Speaking during the public comments portion of last week’s Gates County Commissioners meeting, Bazemore asked the county’s elected leaders to continue in an effort to convince DOT that the superstreet design is flawed, especially at the US 13/NC 137 intersection.

“I know there was a committee and a commissioner that went to Raleigh (to meet with DOT) in reference to the intersections on US 13. I understand that issue with the intersections is still in limbo,” Bazemore said.

“We met with them here in Gates County and the only issues they are willing to discuss and change at this time is they’re going to make sure there are fire hydrants on both sides of the highway,” Commission Chairman Graham Twine responded. “Also at the crossing points of two intersections they will look at placing a lower barrier so fire trucks can cross there without having to go down the road first, turn around and come back.”

Twine said DOT showed the local contingent at the meeting, “some very interesting statistics about the number of accidents and fatalities at these intersections if we changed them.

“My personal opinion is if we convinced them to change an intersection and one child gets killed in an accident, then we (the board) takes that in our lap,” Twine added. “(DOT) is not interested in making any changes to these intersections. They will consider lowering the lip of the barrier (between the opposite lanes of travel) from four to two inches. A fire truck can cross a two-inch lip; they can’t go across it at any great speed, but it can be crossed.”

Gates County Manager Toby Chappell said the DOT compiled “before-and-after” statistics regarding the number and severity of accidents at intersections that were changed to the superstreet design. That design eliminates direct left-hand turns by a vehicle that has approached the four lane highway from a side road. Instead, the driver must turn right, travel a short distance to a crossover, complete with a turn lane, in order to travel north or southbound on US 13/158.

After DOT announced this plan in August of last year, some of the commissioners were concerned the design would add to the response time by the Eure Volunteer Fire Department, possibly driving up their rating, which affects homeowner insurance premiums. There was also concern about the high volume of log trucks that use NC 137 to access US 13/158.

“I feel as though if you really want those intersections changed (away from a superstreet design) and the people of Gates County would unite, the way they did behind the OLF (Outlying Landing Field) issue, we could get them changed,” Bazemore stressed.

“I feel that it would take a united effort by the citizens to get this changed,” Commissioner John Hora said.

“We’re looking short-term and long-term for our roads here in Gates County,” Bazemore remarked. “Right now this project is stopping at Tar Heel Barbecue, but that’s only temporary. This four-lane may continue on US 158 or US 13 or both. Those intersections, at least what’s on (DOT’s) drawings, may be like this all over the county. We need to make some effort now to make them user-friendly. If they’re made that way on the current project, then there’s a high probability they’ll be that way through the other projects. This effort to make a move towards change needs to be made now.”

DOT is proceeding with plans to “design-build” 7.1 miles of four lanes of U.S. 13/158 in Gates and Hertford counties. To date, Gates County officials have met with DOT officials both locally and in Raleigh in an effort to get a better understanding of the project, particularly the superstreet design of intersections. There was discussion by the local contingent with DOT to see if at least two intersections (NC 137 and the US 158 junction at Tar Heel Barbecue) could be reevaluated.

“What we asked for was for DOT to just study this further, to see if there was something else they could do other than put in all these u-turns,” Commission Vice Chairman Kenneth Jernigan said at an October, 2010 meeting of the Gates County Commissioners. “We didn’t ask them to change every intersection, just look at some of these.”

At that meeting, the board approved a resolution forwarded to DOT to have them restudy the intersections from a standpoint of fire department vehicles, EMS vehicles and heavy industrial traffic.

DOT plans to spend $56,809,600 of NC Highway Trust Fund money on this project, one that begins at the US 158/NC 45 intersection at Winton and ends at Tar Heel Barbecue. The plans call for widening the road to four lanes, including the addition of another two-lane bridge over the Chowan River, west of the existing span.

Survey work is already underway with right-of-way acquisition scheduled to begin this year.

Second arrest made in Bertie murder

WINDSOR – A second arrest has been made here in the death of a Martin County man. Bertie County Sheriff... read more