MURFREESBORO — Town of Murfreesboro officials have moved on from the resignation of Lee Capps by hiring an interim Town Administrator.

On Monday, the Murfreesboro Town Council hired Richard N. Hicks, a veteran of local government administration, during a special meeting of the council in which they discussed personnel in a closed session. 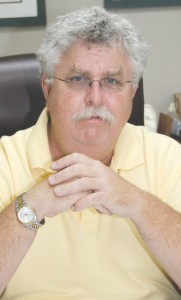 Richard N. Hicks has been hired to serve as interim Administrator for the Town of Murfreesboro.

“He came highly recommended by the North Carolina League of Municipalities and is retired as Town Manager from Farmville,” said Murfreesboro Mayor John Hinton. “We got really lucky. It looks like we’ll weather the storm.”

Hinton said the decision to hire Hicks was unanimous.

According to The Farmville Enterprise, Hicks was with the town of Farmville for 22 years as the Town Manager. He became the first Town Manager for Farmville after the town switched to a council-town manager form of government.

The newspaper further reported that Hicks grew up in Walstonburg, graduating from Greene Central High School in 1974. He went on to Appalachian State University where he earned a bachelor’s degree in political science with a concentration in local government. It was during his time in Boone that he completed a six-month internship with the town of Marion, which would later hire Hicks as its CDBG director and planning director.

Hicks remained in that role for nearly four years while also earning his master’s degree.

The Farmville Enterprise also reported that Hicks got his first town administration job in Pilot Mountain, where he served as town manager for five years. From there, he would take over the town manager’s position in Irwin, where he remained for three years.

In 1989, he responded to an advertisement in a trade publication for the new town manager’s job in Farmville.

While town officials are moving on, Lee Capps is saying the Murfreesboro Town Council requested his resignation last week.

In a voicemail message left on Saturday for the Roanoke-Chowan News-Herald, Capps said the council requested his resignation.

“I thanked the town of Murfreesboro and the citizens of Murfreesboro for the opportunity to work as their administrator and the current town council requested my resignation and consistent with my agreement with them I surrendered in effective at the end of this pay period, so 11:59 on Saturday is transition time more formerly,” he said.

However, meeting minutes tell a different story. Capps reportedly thanked the council for the opportunity to work for the town of Murfreesboro and then asked council members to accept his resignation at the end of the pay period.

Councilman Lloyd Hill made a motion to accept Capps’ resignation at the end of the current pay period and the motion was seconded by Councilman Bill Theodorakis. The council approved the motion unanimously.

Capps’ resignation comes four months after council members terminated him for “failure to perform administrative duties in a timely and efficient manner and failure to inform Council of projects being worked on.”

They reinstated him days later after citizens showed support for the ousted administrator. The reinstatement did come in a 3-2 vote with Council members Theodorakis and Sarah Wallace voting against the measure.

Capps was hired by the town in June of last year.

Pork is likely here to stay

No more earmarks. That is what the President promised in his State of the Union speech a few days ago.... read more