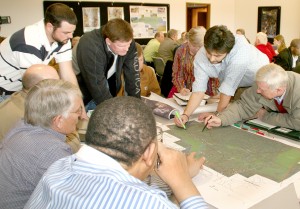 GATESVILLE – It’s sort of like the old saying, “you have the crawl before you can walk.”

If Gates County wants to experience residential, retail and commercial growth, there first must be a vision for that development followed by a plan and the implementation of that strategy.

Such was the purpose of an Economic Development Community Strategic Visioning workshop held Jan. 25 at the Merchants Millpond Visitor Center. That workshop – entitled “Growing Gates” – was staged with collaboration from the School of Design at North Carolina State University. A five person team, led by Celen Pasalar, Assistant Dean for Research and Extension, and Jay Tomlinson, Research Associate Professor of Landscape Architecture, were on hand from NCSU to document Gates County’s strengths and weaknesses as they relate to economic development. Armed with that documentation, the NCSU team will identity possible economic development strategies for the county.

The workshop was made possible by a grant from NC State University through its Office of Extension, Engagement and Economic Development and supported by the Gates County Board of Commissioners

“This is all about interaction, not talking to you, but talking with you,” said Gates County Cooperative Extension Director Reba Green-Holley. “Our board of commissioners will use the documentation generated here today as part of their strategic planning for the future of our county. We all undergo change, but what is best is to have planned change. Without change there’s stagnation and death.”

“We may be a rural county, but we still have needs,” said Commissioner Henry Jordan who was joined at the workshop by fellow board members Kenneth Jernigan, Johnny Hora and Jack Owens, the latter also representing the Gates County Chamber of Commerce as its chairman. “This workshop will help us in seeing where we need to go.”

“It’s great when we have this type of participation and interest in economic development for our county,” said Owens, referencing the 38 people in attendance. “I’m encouraged that we will hear some great ideas.”

Tomlinson led off the workshop by showing the group samples of the NCSU’s broad scope of work in communities throughout the state. In eastern North Carolina, the team has worked on projects in Weldon, Plymouth, Kinston and several towns/cities along the coast.

Although the North Carolina is growing within its urban areas, Tomlinson noted that the majority of the state’s land base remains rural in nature. However, he said, rural areas present challenges when it comes to economic development.

“Urban areas have the money to invest in projects,” he noted. “Rural areas need first to develop a list of community assets and devise a plan of how they want to develop those assets. On first glance coming to your county today, it appears that one of your major assets is where we’re sitting today – Merchants Millpond State Park.”

Tomlinson added that attractive signage was also the key to attracting and promoting economic growth. He showed photos of how the NCSU team has re-designed traditional signage in other areas as well as improving overall aesthetics.

“Signage is a great marketing tool, it gives brief information to a visitor, hopefully directing them to visit the sights here locally,” Tomlinson said. “You also need to look at other types of marketing campaigns, printed material, advertising, etc. You have to develop a campaign that will attract visitors to Gates County. You have to decide first whether or not tourism economy is a future goal of your economic development plan or are you trying to attract major industry, service sector jobs, retail trade or a combination.”

Large scale master planning is vital in the regional aspect. It can include sharing greenways, transportation, parks, recreational venues, bikeways, and blueways (water access) between counties. Heritage farms and festival sites can also figure into the regional planning equation.

In regards to streetscapes/public places, Tomlinson said developing safe, effective areas to move pedestrian traffic, to include crosswalks and sidewalks, is a priority. In the same regard, he said having ample public parking, to include bicycle-friendly access, should also be considered within the planning process. Bikeways are also an element to add to a development plan, as are well-lighted streets.

In planning for building and structural development, Tomlinson said it was a good idea to keep in mind several basic elements – building re-use, stormwater management and historic preservation. He said in the case of Gates County, due to its proximity to several waterways, a suggestion would be to develop user-friendly fishing piers, boardwalks and greenways linking these areas.

“The biggest question you may have is where are we going to get the money to do all of this,” Tomlinson said. “Take it one project at the time, spread it out over a 10-year period. You can also look into grants for building re-use. There’s some money out there; the (North Carolina) Rural Center is a good source for those types of funds.”

The workshop participants then put their minds to work to develop ideas they would like to see implemented. The group was divided into four tables, each staffed with a member of the NCSU team to serve as a facilitator. The participants at each table were charged with the task of looking at a vision of economic development in “big picture” format from a regional standpoint, pro and con issues with Gates County, discuss the physical environment aspects of the county as a whole and how all the local area’s open space can be connected and Gatesville as a separate opportunity. Each table contained a large countywide map and one of Gatesville only.

As a result of that group interaction, some of issues facing the county and proposed solutions included:

A lack of identity of the county within the regional concept;

The county being a “drive-through” community (via traffic passing by via US 13 towards Virginia and US 158 toward the Outer Banks)….what do we have to hold them here;

Lack of a sanitary sewer system;

Lack of North Carolina-based news (local TV stations are all out of Virginia);

The need to market what the county does have;

The need for a Farmer’s Market;

A need for hospitality-type services in the county;

Being a bedroom community for surrounding North Carolina counties as well as Virginia (dollars are leaving the county);

Grow, but maintain the local level of comfort and protecting the rural environment;

Promotion of the local workforce;

Need to develop promotional brochures and launch a commerce website;

Promote the county for what it’s perhaps best known for – hunting and fishing, especially considering the state game lands in the county;

County has an abundance of horse farms, another promotional tool to attract and retain new residents;

Working on a “village theme” – intensify an effort to develop village squares within each community, complete with unique shops;

Need for retail shopping outlets: one, to allow visitors to spend money in the county and, two, as a convenience for county residents to spend their dollars at home;

Connect the Millpond to the Chowan River – for canoeing, boating and hiking opportunities – through a series of blueways and greenways. This effort would also include a plan to clean-up Bennett’s Creek;

Development of Chowan River sites and improved access to the river;

Promote county’s involvement with the Underground Railroad during the slaves flight to freedom;

Sight image: landscaping entrance points to the town of Gatesville;

Bypass Gatesville on NC 137 to re-route all the heavy truck traffic;

Building a new library in Gatesville;

Walking parks in each community;

Development of Sunbury as a commerce center;

Promote access to Lake Drummond in Virginia from Gates County;

Promote the presence of Century Farms (those in the same family for over 100 years), the overall agricultural element in the county, the annual Gates County Rodeo and the newly developed sorghum operation;

Develop a self-guided or volunteer-aided motor tour of Gates County, letting the Millpond’s Visitor Center serve as the hub (starting point); and

“We now have a lot of homework to take back to Raleigh and develop a plan for Gates County,” Pasalar said in her closing remarks. “We now have a better feel for your county, your expectations and visions, and what you want to have in the way of development.”

The NCSU team will return to Gates County in late March for another meeting with local stakeholders. That meeting will be more solution-specific. The time, date and place will be announced soon.