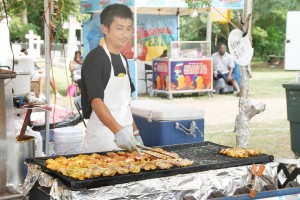 Food vendors, as well as those offering arts and crafts, have been a main attraction at the annual North Carolina Watermelon Festival held in Murfreesboro. File Photo by Cal Bryant

MURFREESBORO — The debate over permit or licensing fees for vendors at the North Carolina Watermelon is continuing here.

Among the items Brook highlighted in her time before council was the fact that the Watermelon Festival Organization has always been its own entity as well as its own financial entity.

“We have never been a part of the Murfreesboro Historical Association in regard to the planning and executing the festival each year, but we are grateful to them for having allowed us to use their phone number and Web site over the past years to get our information (out) to the public,” she said. “We now look forward to having our own means to accomplish that.”

Brook said mail to the committee can now be sent to P.O. Box 736, Murfreesboro, NC 27855 and telephone calls directed to (252) 398-7695. She added they are also in the process setting up a separate Web site, in which the link for the festival on the Historical Association Web site will redirect to.

Brook also presented the organization’s stance on the possible permit/licensing fees for vendors the town has previously discussed.

She noted the history of the festival, including how it began as an avenue in which civic groups from the community could raise money that would be put back into the town for its betterment. Brook also spoke about how the festival has grown over the years, helping to bring visitors from all over and increase tourism. During the festival, she said festival workers and visitors help the town’s economy by frequenting restaurants and stores.

Brook said over the 25 year lifetime of the event, the Watermelon Festival Organization has never been charged by the town for permits or licenses.

“We understand that it has been brought to your attention that the Town Ordinances require such fees,” she said. “We would like to make a request, acknowledging that this is our preference, that the Town Council consider re-writing the ordinance in such a way that would exempt us from such fees.”

She added by doing this, the organization would be able to maintain reasonable costs to vendors and not deter or discriminate against some who would be unable to absorb extra costs.

Brook also referred to the discussions that had taken place over the past few months about street peddlers, noting, the “concerns with them and especially the conflict they seem to pose to stores and restaurants in town during the festival days.”

“We would like to also offer another possible alternative to the current ordinance, changing it to a ‘Site Specific’ one, with a shorter term, perhaps monthly or weekly,” she said. “This would allow the town to limit or suspend licenses during the festival, outside of the festival grounds and potentially control the peddler issues here in town.”

She added this would also give the town an avenue in which to make the festival site one licensing site, eliminating the potential for multiple fees and allowing that site exemption during those four days of the Watermelon Festival or limiting it to one nominal fee.

Brook concluded the Watermelon Festival Organization offers dialogue with the town on the possible changes and considerations with the current ordinances surrounding the licenses.

“We need these issues resolved in a rather expedited way so we can proceed with our vendor mailings as soon as possible,” she said.

During her presentation to Town Council, Brook also informed board members about officer changes on the organization’s Executive Board. Lynette Bunch and Kay Thomas will continue to serve as Co-Chairs of the Festival and Byron Simonds will continue as Vice Chair. Hal Thomas has taken the position of Treasurer (replacing Brenda Watson) and will continue as secretary until a new secretary is appointed.

“I have been appointed to a new position on the Executive Board as Event Coordinator,” she said. “I will be, for the most part, the person leading the day-to-day organizing, planning and coordinating of the various aspects involved with putting this festival together from now through the festival itself.”

Brook added that she will be the communication liaison for the Executive Board and the Committee.

Mayor John Hinton said the council would take the organization’s suggestions under consideration as there were two council members (Sarah Wallace and Molly Eubank) absent from Tuesday’s meeting.

WINDSOR – Magistrates in Bertie County will be safer in the coming weeks. That will happen thanks to decisions made... read more