Perry-Wynns is subject of new book 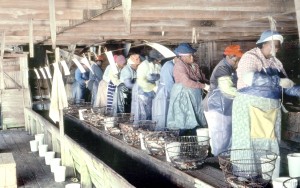 This photo from Frank Stephenson’s vast collection shows the employment impact that the Perry-Wynns herring processing plant had on the local area. Here, “cutters” process the fresh herring, fish that were later shipped throughout the world.

MURFREESBORO – The Roanoke-Chowan area is as rich in history as the fertile soil that comprises the vast land of the northeastern Coastal Plain.

That abundant history, one that dates back prior to the Lost Colony and Jamestown settlements, is always on the mind of the area’s leading historian – E. Frank Stephenson Jr.

Stephenson is scheduled to release his latest work – “Images of Perry-Wynns Fish Company” – during a book signing scheduled for 9:30 a.m. until 1:30 p.m. on Friday, Dec. 17 at the historic property in Colerain that was once home to the world’s largest herring processing plant.

“It’s a North Carolina and worldwide landmark,” Stephenson said of the Perry-Wynns plant on River Road. “This place shipped herrings, including its famous corned herrings, all over the world. Those delicious fish became a staple on many tables.

“Herring fishing was a way of life here in the Roanoke-Chowan area for hundreds of years,” Stephenson continued. “Not only did processing facilities such as Perry-Wynns help feed the world’s population, it also offered employment for many of our local citizens.”

Unfortunately, the commercial herring industry began a slow decline after experiencing a boom in the late 1950’s and early 1960’s where annual harvests exceeded 25,000 metric tons. The state began limiting the herring harvest in 1995. Eight years later (2003), Perry-Wynns suffered even a bigger blow when its plant was destroyed by the storm surge from Hurricane Isabel.

However, thanks to the preservation of historic photographs, stories and other forms of documentation, Stephenson was able to re-create the glory days of Perry-Wynns.

“It’s a great story to share,” Stephenson said. “It’s a look back at the proud history of our area.”

The book features numerous interior and exterior photographs of the facility.

Stephenson will also autograph copies of his new book at two signings on Saturday, Dec. 18 – 9 a.m. until 12:30 p.m. at the Tunis Landing Bait Shop in Tunis and from 1:30-3:30 p.m. at Walter’s Grill on Main Street in Murfreesboro.

The book can be ordered ($20 per copy plus $3 shipping) from Meherrin River Press by calling 252-398-3554. Copies will be for sale at Perry-Wynns Fish Company in Colerain, Tunis Landing Bait Shop, Walter’s Grill and the Blue Front Shoppe, Jefcoat Museum and the Murfreesboro Historical Association Gift Shop, all in Murfreesboro.

For Stephenson, this marks his 24th book, all with Roanoke-Chowan area ties. His other works include topics such as local inventor Richard Gatling, moonshining, Chowan Beach, Chowan University, seine haul herring fishing, chitlins, the heyday of Negro League baseball in Hertford County, the Murfreesboro railroad, the town of Murfreesboro, the Ahoskie Tobacco Market, Parker’s Ferry and a history of Hertford County.

Stephenson, who is on the administrative staff at Chowan University, has been a guest on National Public Television and National Public Radio on a number of occasions concerning his books. Numerous magazines and newspapers, including the Wall Street Journal and the Washington Post, have published stories on his books.

JACKSON — The Northampton County Board of Commissioners have agreed to extend the option to purchase land at the Northampton... read more