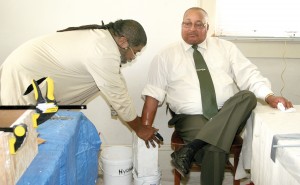 Stephen Jackson (right) starts the process of having his hand cast in bronze, part of the North Carolina Veterans Park in Fayetteville. Jackson was chosen as the Northampton County representative at that park. Shown at left is artist Alexis Joyner. Staff Photo by Amanda VanDerBroek

JACKSON — Among the many hands that have built this nation are those who have served in the military.

On Monday, Vietnam War veteran Stephen Jackson of Jackson sat with plaster up to his elbow. Though at times Jackson looked a little uncomfortable, the smile of appreciation on his face never vanished.

In the end, Jackson’s ordeal would be for a good reason as the mold of his right hand will be cast in bronze and he will represent Northampton’s veterans at the North Carolina Veterans Park in Fayetteville.

Northampton County Veterans Service Director Jeff Futrell said Jackson was chosen by the Northampton County Board of Commissioners to represent the county because of the dedication and support Jackson shows to his fellow veterans.

“It’s an honor,” said Jackson during the hand casting effort performed by Elizabeth City artist Alexis Joyner. “I appreciate it and I thank them for choosing me.”

Jackson joined the US Army in 1969, one year after he graduated from Gumberry High School. After a tour in Vietnam along with many awards and citations, including the Army Commendation Medal, the Combat Infantryman’s Badge and the Bronze Star, he left the Army in 1972.

“I enjoyed my military career looking back now,” he said. “If it wasn’t for the military the United States wouldn’t be where it is today.”

Jackson still works today for the good of his country and community through various organizations and boards, including the Veterans of Foreign War (VFW) Post 4312 of Seaboard, the Northampton County Branch of the NAACP and the Northampton Memorial Library Board of Trustees.

Jackson’s mind is never far from his fellow veterans and those who serve today.

“I do anything I can to assist any veteran I can,” he said. “I’d just like to appeal to the public that if there is anything you can do to help a veteran, please do it.”

Jackson had good company during his casting as Northampton County Commission Chairperson Fannie Greene, Vice Chair James Hester, Northampton County Manager Wayne Jenkins and Futrell prepared to have molds of their own hands cast in a show of support for veterans.

The four joked and chatted as Joyner, assisted by his wife, Robin, and Conway Middle School art teacher Rhonda Jones (a former art student of Joyner), layered their hands in hydrogel, paint thinner and plaster in a wood frame lined by cardboard and clay.

For the busy county officials it was a painstaking process that took an hour and a half, but in the end all four agreed it was worth it because of whom they were doing it for.

Jenkins and Futrell can identify with military life as they both served.

After 22 years, Jenkins retired from the North Carolina National Guard in 1995. It’s a role that helped instill in him such traits as preparation, flexibility and the importance of taking care of those around you.

Jenkins said the time for the hand casting was worth spent.

“To give an hour and a half is insignificant to the contributions the many veterans have contributed,” he said.

Futrell, who joined the US Navy in 1990 and served until 1998, agreed being confined in a small space for such a lengthy period of time was worth every moment.

“I’m honored to be a part of it,” he said. “I think it’s already an honor serving the veterans (in this area).”

Greene and Hester, as citizens, showed their support for the veterans of their community and nation.

“First of all it’s an honor to support the veterans, it’s nice to be involved and appreciate the service they’ve given,” said Greene. “The end result will be good, it’s for a good cause.”

Hester was also honored by his participation in the hand casting.

“I feel like it’s an honor, it really is,” said Hester. “When you think of the sacrifice these men and women have given, it’s the least I can do.”

Hoggard, Perry to lead Bertie Board