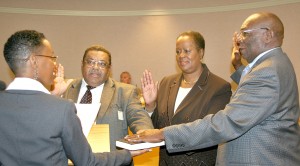 JACKSON — For another year, Commissioners Fannie Greene and James Hester will stay in their respective leadership roles on the Board of Northampton County Commissioners.

On Monday, Greene and Hester were both re-elected by their colleagues to their roles as Chairperson and Vice Chairperson.

County Attorney Charles Vaughan then opened the floor for nominations for Chairperson.

Deloatch offered Greene as a nominee. When no other nominations were offered, Vaughan closed the nominations and called for the vote. The board unanimously voted for Greene as the chairperson.

Vaughan then opened the floor for nominations for Vice Chairperson.

Deloatch nominated Hester. The nominations were closed after no more were offered and Vaughan called for the vote. The board unanimously voted Hester into the position.

After their re-election, Greene and Hester thanked their colleagues for their vote of assurance.

“Thank you again to the Board of Commissioners for the confidence that was place in me for another year,” she said. “And I will continue to give my very best as your chair in leading the board of commissioners.”

“Thank you for your nomination and selection,” said Hester.