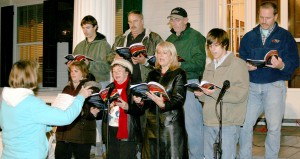 MURFREESBORO — Though the tree had less lights than the one lit each year in Rockefeller Center, the sights and sounds here Friday night were uniquely Murfreesboro.

Music, hot cocoa and an early visit from Santa and Mrs. Claus on a crisp December evening is how citizens welcomed the beginning of the holiday season at the Murfreesboro Chamber of Commerce Tree Illumination Ceremony.

A group of about 70 citizens made sure they came bundled up for the second annual event as the temperature dipped into the 20s outside the Roberts-Vaughan House on Main Street.

“We are delighted that you came out here for this special event,” said Murfreesboro Chamber Executive Director Judy Hachey to the crowd.

Murfreesboro Mayor John Hinton, who had the privilege of flipping the switch, joked how he questioned Hachey if Murfreesboro’s tree illumination ceremony would compare to New York City’s event.

“I did ask Judy if there was 3,600 lights like Mayor Bloomberg had in New York City, because if there is it will probably put Murfreesboro in the dark,” he quipped.

Hinton also hinted at the special anniversary coming up next year.

“This is a very special Christmas coming up this year because in just another year, we will be within two weeks of the 225th anniversary of the charter of our wonderful town here in Murfreesboro,” he said. “We hope everybody can be together again for the next Christmas tree lighting.”

With a little help from the Murfreesboro Fire Department, Santa and Mrs. Claus arrived in style on a fire truck. They spent time with each child listening to their Christmas wishes.

Hachey said the tree illumination ceremony has been done in the past, but was resurrected last year.

She said it’s fun events like these that bring the people in Murfreesboro together and endorses a strong community feeling. That in turn helps to support what the town has to offer.

“We’re trying to promote businesses and unity through the community,” she said.

Hachey said the event is also a good way to ring in the holidays.

“It’s just a great way to start the season,” she said.

The ceremony also kicked off numerous events going on around town in the upcoming week, including various musical concerts at Chowan University and the Candlelight Christmas Tour.