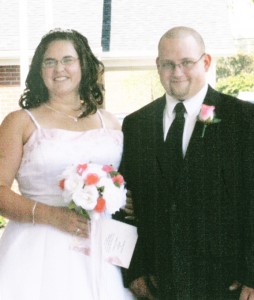 The groom is the son of Tommy and Angie White of Ahoskie. He is the grandson of Larry and Brenda Lyles of Halifax, Hardy Hedgepeth of Eure, Maggie Benson of Ahoskie and Tommy and Virgie White of Murfreesboro.

The bride was escorted and presented in marriage by her father.

The bride’s sister, Jennifer Reason of Murfreesboro, served as the matron of honor.

The ring bearer was Brandon Barmer, son of the bride, of Franklin, Va. He pulled his baby brother, Tommy Lee White III, down the aisle in a decorated wagon.

Linda Johnson, godmother to the groom, was the Mistress of Ceremonies.

The pianist was Lori Belangia of Ahoskie.

Soloists were Lori Belangia, who sang “God Bless the Broken Road,” and Linda Johnson of Ahoskie, who sang “From this Moment On” as the unity sand was poured.

A reception, given by Linda Johnson and the groom’s parents, was held in the church fellowship hall following the ceremony. There, a three-tier cake topped with two encased glass hearts and decorated with pink roses and pearls was served.

Reception attendants were Victoria White of Ahoskie, Crystal Allen of Kelford and Lori Belangia of Ahoskie.

A rehearsal dinner, hosted by the groom’s parents, was held at the church fellowship hall the evening prior to the wedding.

The couple took their honeymoon trip to Myrtle Beach, SC.

A bridal shower was given by the Ahoskie Church of God Ladies Auxiliary on August 21.

A bridesmaids dinner and surprise lingerie shower for the bride was given by Linda Johnson and Angie White on September 4.