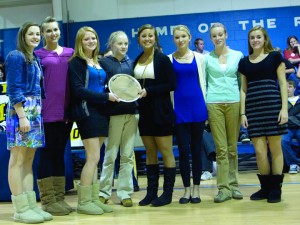 The championship of the tournament – which is sponsored jointly by the Roanoke-Chowan News-Herald and United Country Joe Murray Realty – is the third for Ridgecroft in the tourney’s five years. Ridgecroft topped Northeast Academy 62-20 in the finals.

Senior Brice Harrison led the way for the Lady Rams with 15 points while Miller Bryant, Hennie Larabee and Sara Hackney scored 11 each. Lauren Colson chipped in 10 points and a half dozen assists. Ashton Liverman led the Lady Eagles with 13 points.

The first quarter was a low-scoring affair, but set the tone for the contest as Ridgecroft raced out to an early lead thanks to back-to-back buckets by Hackney and Colson.

Northeast stopped the run with a free throw from Ivey Little and a basket by Liverman as they closed within 4-3.

Elizabeth Joyner scored the final hoop of the first period and gave the Lady Rams a 6-3 edge.

The second quarter started with Harrison and Colson hitting consecutive buckets to push the Ridgecroft lead to 10-3, but Little again was perfect from the line and closed the gap to 10-5.

Ridgecroft took over from that point, however, as they scored the next 12 points in a row. Harrison started the spurt with her hoop and then Colson added another basket.

A three-pointer by Larabee was followed by the same player scoring a three-point play from the line. Bryant then scored to push the lead to 22-5 with 2:20 remaining on the first half clock.

Free throws by Liverman and Taylor Morris got the Eagles within 22-7, but Bryant scored again just before the intermission to give Ridgecroft a commanding 24-7 lead as they headed into the locker room.

The hosts continued their strong run over the next two and a half minutes, outscoring Northeast 6-0 thanks to hoops by Harrison and Bryant and free throws by Larabee and Harrison.

Liverman hit back-to-back scores for Northeast to stop the run and close the Eagles within 33-11, but Ridgecroft went on another tear, this time outscoring Northeast 8-0 to take a 43-11 lead with two minutes to play in the third period.

It was again Liverman who stopped the run with a three-point play and a field goal that closed the gap to 42-16 at the end of the quarter.

Ridgecroft started the final period with a Hackney bucket before Liverman scored again.

Joyner had a hoop after that basket and Harrison added a free throw as Ridgecroft took a 30-point edge (48-18). Three more hoops in a row – two by Hackney and one by Harrison – gave Ridgecroft a 54-18 lead before Mollie Cocke scored for Northeast.

The Lady Rams, however, had the final eight points of the contest to secure the championship.