Students give back to community 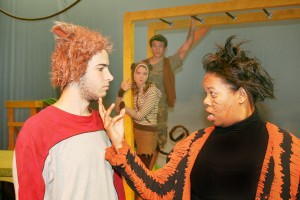 Chowan University students Brian Halbach (front left), LaVontae Wilson (front right), Anna Jones (back left) and Michale Siverio (back right) run through a scene from Edward Mast’s “Jungalbook”. The play will be performed at Chowan’s Turner Auditorium at 7 p.m. on Friday and Saturday and 2:30 p.m. on Sunday. Admission is $3. Staff Photo by Amanda VanDerBroek

MURFREESBORO — The art of drama will be giving a local park here a much needed boost.

This weekend, Edward Mast’s “Jungalbook” will come to life at Chowan University’s Turner Auditorium with all proceeds from the play going toward purchasing new playground equipment for Riverside Park.

“It is a good opportunity to raise funds for the park,” said Steven Harders, Chowan’s Associate Professor of Speech and Drama, who is directing the play.

Harders said the idea to raise funds for the park came from “Jungalbook” itself, which is set in a playground. The play is an adaptation of Rudyard Kipling’s collection of books and poems called “The Jungle Book”, which was made popular with Disney’s 1967 animated film version of the same name.

Harders said in Mast’s “Jungalbook” the same characters can be found.

“The story is the same, he (Mast) just puts it on a playground,” Harders said. “People will definitely recognize (the story).”

The plot follows the adventures of a child named Mowgli, who was abandoned as a baby. Mowgli is saved as an infant by a panther named Bagheera and raised by Akela, a wolf. Along the way, Mowgli learns the laws of the jungle, with the help of some new friends, as well as the price paid for breaking them. The play culminates with a showdown with the antagonist Shere Khan, a fierce tiger.

Since the beginning of September a cast of 20 students have worked on the play.

Before opening night, the cast will perform a couple of matinee shows for local grade school students. Harders said the play is appropriate for children in second grade and up.

The play is approximately 55 minutes long.