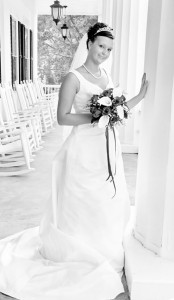 A program of wedding music was provided by pianist Myrna Perry of Rich Square and soloist Floyd Jenkins of Conway.

Given in marriage by her parents and escorted by her father and grandfather, the bride wore a satin A-line gown. It featured a tank style bodice with a flattering sweetheart neckline accented with beaded embroidery. Her headpiece was a tierra with white pearls and rhinestones accompanied by a white, finger tipped length veil. She carried red roses and white calla lilies with greenery and baby’s breath.

Isadora (Dodo) Johnson of Jackson, friend of the bride, served as the mistress of ceremonies. Jessica Ellis, cousin of the groom, served as program and guest attendant.

A reception, hosted by the bride’s parents, was held following the ceremony at the Roxobel Community Building.

The bride is a 2010 graduate of Northeast Academy and is furthering her education at Coastal Carolina Community College in Jacksonville.

After a honeymoon trip to Pilot Mountain, NC, the couple is residing in Jacksonville.

After-rehearsal diner, hosted by the groom’s parents, was held at the Fellowship Hall of Grace Baptist Church.

Oct. 2 – a bridesmaid’s luncheon was held at Tavern 125 in Murfreesboro hosted by Beth Phillips and Julie Sykes.