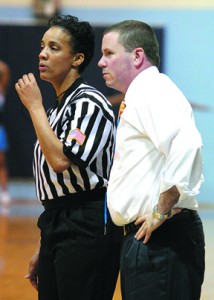 Chowan University Women's Basketball Coach Pat Mashuda looks to lead his team to the top of the CIAA in 2010-11.

“We may not be that tall,” said senior guard Najah Harris at “Meet The Hawks Night on Thursday at Andy’s Restaurant in Murfreesboro, “but our rebounding is going to surprise some people.  We think of ourselves as ‘little giants’ and if we pick up on who we are we’re going to be just fine.”

The Hawks, who end their near-one month of pre-season practices with today’s opener, are picked to finish third in the Central Intercollegiate Athletic Association’s North Division in this, the conference’s 99th year – and second for Chowan as a full-member – behind Bowie State of Maryland, Virginia State and Elizabeth City State.

Among the other pre-season honors, the Hawks’ Hampton, Virginia sophomore, Talaya Lynch – 2010’s CIAA ‘Rookie of the Year’ – is named on the preseason All-CIAA first team.

Chowan enters the new campaign following a 9-17 mark a season ago, and 7-14 in the CIAA.  This year’s squad boasts three returning starters in Harris, Lynch and Ransheeda Jennings and seventh-year  Head Coach Pat Mashuda has also added six first-year players, several of whom could see significant playing time.

“The four freshmen will be a great help,” said Mashuda with a sly smile.  “Jennifer Hamilton (6’0 forward, Chambersburg, Pa.) gives us a back-to-the-basket presence we haven’t had here in a couple of years, and we’ve got three other players from Maryland (5’10” forward Kara Davis, 5’6″ guard Janelle Murphy, and 5’9″ wing Courtney Knight).

“We got another point guard (Murphy) to go with Najah,” he added, “and two forwards in Courtney and Kara, so we feel we addressed our biggest needs.

“We’re blessed to have a lot of great guards in the program including seniors Najah,  Brittany (Nicholson) and Pee (Patricia Price), and not to mention Ransheeda is a junior and the ‘Rookie of the Year’ in Talaya gives us five great players, not to mention a couple of other people that are going to get some more minutes this year.”

Lynch put up just over 11 points an outing last season while Jennings dropped just over 14 points an outing to lead the team is scoring and had a team-high 49 steals. Harris contributed 9.8 points a game last year to go with 102 season assists and last year’s sixth player off the bench, Nicholson, will also give the team much needed experience.

“This is the closest-knit team I’ve had in 17 years of coaching,” said Mashuda.  “They come in and work hard every day, they challenge each other in practice, and it’s those kinds of little details that will help us be more successful this year.

“I haven’t had to yell as much in practice,” he added with a grin.

However, the Hawks did lead early in the contest before their taller, more physical, Southern Conference opponent took control of the game.

“They (Elon) played their system well that night,” said Mashuda, “but we did some great things early.  When we executed our offense we were in good shape, but when they got us playing at their speed then the ball game was tipped in their favor.

“When we do the things we’re capable of: break pressure (defense), be patient and find the open teammate, we’re pretty solid.

“Defensively, we did well in the half-court,” he added, “but our full-court pressure needs a little more work.”

“We got beat a lot on the boards last year,” chimed in Harris, “we’ve really got to rebound the basketball.

“I think our team chemistry is the best it’s been since I’ve been here,” she added. “We know each other very well on the court and that’s going to help us communicate a lot better. It’s a team effort, a team thing; we’ve got to do better.”

“I’d like to lead the CIAA in assists,” she said with a smile. “I averaged eight or nine last year and this year I’d like to make it 12. As for team goals, I’d like to go out with a championship.”

“It’s an exciting time of the year,” said Mashuda, “we’ve been looking forward to playing a home game to start the year and I think as long as we keep within ourselves and do what we know we need to do to be successful we’re going to be in great shape.”