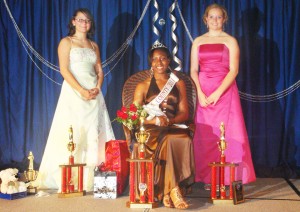 GATESVILLE – The show, as they say, must go on.

While five girls were originally expected to participate, due to a cancellation as well as a last minute illness suffered by Kirby Hofler, the competition consisted of three contestants competing for the title.

Joanne Williams, founding member of BELLES, narrated the event. She described the pageant as something that will act as a “stepping stone in the fulfillment of many goals and aspirations for each contestant.”

Those contestants were Imani Colbert, who hopes to become a professional dancer; MiKayla-lyn Hassell, whose hobbies consist of dancing, cheerleading, reading and four-wheeling; and Alexander Toti, who aspires to graduate from N.C. State and enjoys participating in school clubs, playing piano and golfing.

Each of the contestants, all students at Gates County High School, participated in three phases, including a talent performance, evening gown competition and answering a question during the “insight” portion of the event.

During the talent portion, Toti performed “Festival of the Fountains” by David Carr Glover on the piano. She was followed by Colbert’s dance routine to Mike Posner’s “You think you’re cooler than me?” Hassel finished the segment by tap dancing “Fire Burning” by Sean Kingston.

After displaying their talents the girls hit the stage to present their evening gowns before individually answering different questions during the insights segment.

Being asked, “What helps you when you’re afraid?” Toti answered “Knowing everything will be ok.” When asked to complete the following statement, “Twenty years from now I will be happy if…..”, Colbert responded, “having my family with me and career goals accomplished.” Hassell was asked, “How will you know when you’re ready for marriage?” She explained that the key would be knowing she was “ready to take on the challenges of married life because you have another person to think about.”

While the contestants were preparing for their next stage of competition, the audience was entertained, first by Vicki Wiggins, the 2010 Miss Teenage Gates County, who sang “I know who holds tomorrow” by Kelly Price; and GCHS students Matt Johnston and Austin London who, while playing guitars, performed “Swing Town” by The Steve Miller Band as well as an original written by Johnson entitled “Heading Home.”

Before crowing the 2011 winner, two special awards were given. Hassell received the Miss Congeniality award which recognizes a participant’s performance, dedication, interaction with others involved with preparing for the pageant and overall attitude. The Spirit of the Pageant Award, given to the contestant raising the most money through ads, tickets and donations, went to Toti, who raised $856. All of the proceeds raised from the pageant will go toward scholarships for seniors.

After the votes were all tallied, the title of 2011 Miss Teenage Gates County was earned by Colbert. Upon learning of her victory, she described it as “exciting, astounding and overwhelming.”

Wiggins, now a freshman at UNC Chapel Hill, offered a few words of wisdom to her replacement, saying, “enjoy and treasure it. Enjoy it every day.”

“Everybody is ready to get out of Gates County and she’s a senior this year, I just hope she takes her time,” said Wiggins. For Wiggins, the best part about being Miss Teenage Gates County was receiving “really nice gifts from BELLES; it’s things you can actually use…I was well prepared for college.”

Hassel was chosen as the second runner up and Toti, who will take over if Colbert is unable to fulfill her obligations, was the first runner-up.

Next year may be the final Miss Teenage Gates County Pageant.

“We’re thinking about letting (year) thirty be it,” said Williams, explaining that it is becoming more difficult to recruit participants despite only requiring a C+ average and clean disciplinary record. Also, many of the original members of the Gates County BELLES have retired and do not have as much daily contact with the children, making it more difficult to muster interest.

To the Editor: I wanted to take this opportunity to let the community know what a great honor it is... read more