SUNBURY – Over his lifetime, James Staley (J.S.) Pierce Jr. wore numerous hats in service to his county and his country.

If there was just one hat that would cover them all, it would be the one labeled “I Love Gates County.” 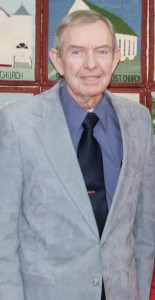 Pierce – a simple farmer who served in numerous roles as a public official in Gates County – died Friday, Nov. 5 in his Silver Springs Road home near Sunbury. He was 74.

Over the years, Pierce remained true to his native Gates County, working the soil as a farmer. However, his true love, outside his family and church, was serving the citizens of his community and Gates County.

“We both were farmers and thought alike a lot,” said Gates County Commissioner Wade Askew who served for two years on the board with Pierce. “He, like I, loved Gates County and it showed through his actions on the board and in his church and his community.”

Askew added that Pierce always had a good disposition.

“I never once saw him mad,” Askew recalled. “He was very good to work with on the board. He always put a lot of thought into the decisions he made. And he always took time to help those who came before the board with any type of problem. He was fair to everyone.”

Like Askew, Commissioner Kenneth Jernigan also served two years on the board with Pierce. In both those years, Jernigan was the board’s vice-chairman, a position he still holds today.

“It was a real pleasure working with him,” Jernigan said. “J.S. was always an easy going person, generally interested in what was right for the county. He loved working for the county and its people. He wanted to see the county prosper and grow while still seeing it maintain its rural charm.

“He also loved his church (Beulah Baptist) and was very active as a member,” Jernigan added. “J.S. was also very active in his community; he served the Sunbury fire department for a long time.”

One of the final decisions Pierce made as a County Commissioner in 2008 was to hire current Gates County Manager Toby Chappell. At that time, Pierce, still serving as Chairman of the Gates County Board of Commissioners, had high praise for Chappell, saying… “It’s hard to find young men with the leadership experience that he brings to the table.”

Chappell remains grateful today for the confidence bestowed in him by Pierce.

“No matter how long my career lasts in county management, I’ll forever be proud that my life crossed paths with J.S. Pierce,” Chappell said. “The biggest thing that really struck me about Mr. Pierce was that he was such a decent man. He didn’t showboat; he didn’t look to embarrass you; he treated everyone with a great deal of respect. He was a very humble man, one that never treated anyone like they were beneath him.”

Chappell also paid Pierce the ultimate compliment, saying, “Anyone either in the public sector or thinking about becoming a public official needs to model their demeanor after J.S. Pierce. He was a man of reason; he was a voice of reason.”

Commissioner Henry Jordan, who ran successfully for Pierce’s seat on the board, said he was sad to hear of his death.

“I was always impressed with J.S. and the way he conducted himself as the chairman of the board,” Jordan stated. “I learned quite a bit from him. I was able to take a lot of what I saw in him into my service as a commissioner and felt very honored to take his seat on the board.”

Jordan continued, “His death is a great loss to all of Gates County. I pray that his family will be comforted by the fact that he served his county with honor and distinction and was such a great leader for all citizens of Gates County.”

Not only did Pierce serve as an elected county official, he also was active within his community…Chairman of the Board of Deacons, Trustee and Sunday School Superintendent at Beulah Baptist Church as well as a 44-year member of the Sunbury Volunteer Fire Department where he was chosen as Fire Chief on several occasions.

He is survived by his wife of 50 years, Helen Hofler Pierce; two daughters, two grandchildren and a sister, who all, like J.S. Pierce, call Sunbury as home.

Funeral services will be held at 4 p.m. on Monday, November 8, 2010 in Beulah Baptist Church by the Revs. Tom Hall and Ron Parr.  Burial will follow in Damascus Christian Church Cemetery.  Friends may join the family at the residence.

In lieu of flowers, contributions may be made to the memorial fund of Beulah Baptist Church, in care of Mary Ellen Briggs, 421 Acorn Hill Road, or to the Sunbury Volunteer Fire Dept., in care of Tom Perry, 270 NC Hwy. 32 North, both in Sunbury, NC  27979.