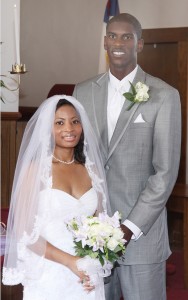 The groom is the son of Ronnie F. Colbert Sr. of Raleigh and Carol Broadnax of Midway, GA, and the grandson of Earlenia Braxton of Culpeper, VA, Percy Bunn Jr. of Littleton and the late Verlina Conyers.  He is the great-grandson of the late Celia Brinkley.

The bride was escorted and given in marriage by her father, Willie Peoples.  Nuptial music was provided by vocalists Julie Everett, Curtis Jordan, Rhonda Roscoe and Pat Taylor.  Victor Jones was the pianist.

The maid of honor was Kayla Peoples of Raleigh, twin sister of the bride.  Bridesmaids were Erin Colbert of Atlanta, GA and Deonna Suiter of Tarboro, friends of the bride, and Tracy McLean of Greenville and Ms. Leah Williams of Columbia, SC, sorority sisters of the bride.  Trinity Anderson and Ava Conway were flower girls.

The best man was Howard Pride, friend of the groom.  Groomsmen were Charles Bennett and Luther Boyd, both of Raleigh, Kevin Bethea of Fayetteville and Brian Harris of Columbus, OH, friends of the groom. Antoine Pugh, Jr. was the ring bearer, cousin of the bride.  Ushers were Allen Colbert, brother of the groom, and Tavon Harris and Elysha Pace, cousins of the bride.

Following the ceremony, a dinner-dance reception was held at Ahoskie Inn Hotel, Ahoskie.

The couple honeymooned at the Ritz-Carlton Resort, Amelia Island, FL.

A rehearsal dinner was held July 23 at New Haven Baptist Church fellowship hall, given by parents of the bride and groom.

AHOSKIE – Paul Alton and Murrell T. Holloman of Ahoskie celebrated their 64th wedding anniversary on Oct. 18. They were... read more