WINDSOR – Make it five and counting.

Hertford County High School rolled past rival Bertie 56-19 here last night (Friday) and secured their fifth straight victory in the series and second this year. In topping their rivals, the Bears secured a 5-1 finish in the Northeastern Coastal Conference, good for second place. 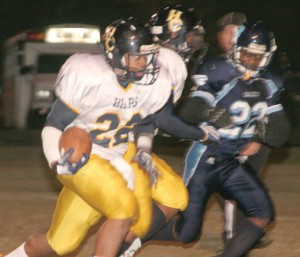 HCHS junior back Aaron Thomas breaks free for part of his 50 yards in Friday's win over Bertie.

Despite the lop-sided score, Hertford County only had 25 yards more total offense than the Falcons. That came due in large part to working on a short field for much of the first half.

The scoring came early and often for HCHS in the first quarter.

After stopping Bertie on a fourth-and-three at the Falcon 40-yardline, the Bears took just two plays to punch it in.

After junior Aaron Thomas lost a pair on first down, senior quarterback Petey Boone called his own number and shredded the Falcon defense for 42 yards and a touchdown on the next play.

Senior Brandon Warren booted the first of three first-quarter extra points and the Bears led 7-0 with less than three minutes gone from the game clock.

On the first play from scrimmage after the kickoff, Dorrien Askew stepped in front of an option pitch by BHS quarterback Malcolm Cherry and recovered the loose pigskin.

Two plays later, Thomas went in from 16 yards out and, coupled with Warren’s kick, it gave Hertford County a 14-0 lead with 8:11 still to play in the first period.

Bertie got the ball back on their own 20-yardline after the kickoff and senior running back Thomas Perry bulled forward for a first down, but the ball was stripped and recovered by Boone at the Falcon 34-yardline.

After an incomplete pass, Thomas scampered for 14 yards. Bertie committed a pass interference penalty on the next play and moved the ball down to the 10-yardline.

Boone was sacked for a five-yard loss on the next play, but Devin Vaughan picked up 14 yards on the ensuing play to give the Bears the ball at the one. Vaughan then plunged it in from there with 5:30 to play in the first quarter. Warren added the extra point and HCHS had a 21-0 advantage.

The Falcons appeared to finally  have a drive going on their next possession.

Cherry picked up six yards on first down and then Perry backed that up with two on second. The two then added runs of four and five each to move the ball to the 37-yardline.

On the next play, however, the fumble bug struck again and this time Thomas made the recovery for the Bears.

HCHS moved the football from the Bertie 37 down to the five-yardline, but then a penalty made it fourth-and-goal from the nine. Boone found Dontez Tyler on the play for the score, but a holding penalty nullified the touchdown.

Second-year HCHS skipper Scott Privott decided to allow Warren to attempt a 43-yard field goal and the senior was perfect on the attempt to make it 24-0 with 10:10 remaining in the second quarter.

The Falcons finally struck back on their next possession.

Facing a third-down and eight, Cherry handed off to Corbin Rascoe and the senior weaved his way 78 yards for a Bertie touchdown. Daquan Perry added the extra point to get the Falcons within 24-7.

Hertford County struck back quickly, however. After recovering the pooch kick at their own 41-yardline. After picking up no yardage on the first play, Boone scampered 51 yards on the next play to move the football to the Bertie eight-yardline.

Two plays later Boone carried it in from six yards out. The conversion failed, but HCHS led 30-7.

Bertie fumbled again on the next possession and Thomas was again Johnny on the spot to recover the loose football. The Bears then drove 25 yards on four plays capped by a seven-yard Boone score. The conversion again failed and Hertford County led 36-7 with 5:01 to play in the first half.

Bertie answered quickly, however, when Rascoe broke off a 70-yard touchdown run. The kick failed, but Bertie was within 36-13.

It didn’t take long for Hertford County to find paydirt again, however. Boone connected with Justin Watson on a 44-yard pass . That set up a 25-yard Boone run to paydirt. The snap on the conversion was low and the conversion failed leaving HCHS ahead 42-13 heading into halftime.

The Bears scored on the opening drive of the second half when Thomas capped a 47-yard drive with a five-yard run. Ansley Lassiter added the conversion and HCHS led 49-13.

Bertie’s final score came late in the third quarter when Thomas Perry broke off a 37-yard run to paydirt. That capped a six-play drive. The kick failed and HCHS led 49-19 with 1:54 to play in the third period.

Hertford County’s final score came with 1:40 to play in the contest on a five-yard run by Lailun Majette. Lassiter added the kick and HCHS led 56-19.

Bertie had 348 yards during the contest, all coming on the gorund. Rascoe led the team with 146 yards on three carries while Perry had 112 yards on 14 carries.

The Falcons end their season at 2-9 while HCHS improves to 8-3. The Bears will play next Friday in the opening round of the North Carolina High School Athletic Association 3-A playoffs.

WINDSOR – They are teams at the opposite end of the playoff spectrum. Bertie High School’s varsity football team is... read more