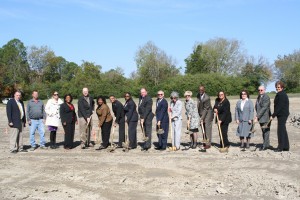 JACKSON — A new facility has been a long time coming for those at the Jackson branch of the State Employees Credit Union.

On Monday, employees at the Jackson office were joined by members of the local SECU advisory board for a ground breaking ceremony.

The location of the new building will be across the street from the Trademart/Wilco Hess. The new facility will feature many new amenities for banking customers, including a drive-thru and ATM drive-thru, something the current building located further down the street never had.

According to Jackson SECU Vice President City Executive Patricia Whitaker, the 4,200 square foot building will tentatively be completed by May 2011 by A.R. Chesson.

“We’re excited,” said Whitaker. “We’ll be happy when it’s up and running.”

“The town of Jackson is certainly very pleased and excited with respect to the State Employees Credit Union’s decision to construct a new state-of-the-art facility downtown,” he said. “This project fits very nicely within the town’s economic development model. Since Jackson serves as the county seat, this facility will afford the state and local government employees in the area a first class facility to conduct their business.”

For the second time since 1999, floodwater from the Cashie River caused extensive damage to the Lawrence Memorial Public Library... read more