“We anticipate that the studies and decisions regarding the future of the Franklin site assets could be completed in early 2011,” she wrote in an e-mail. 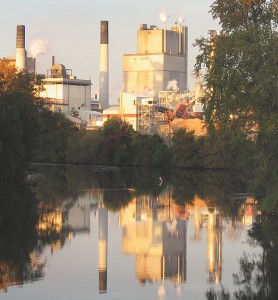 The now closed International Paper Mill in Franklin, Va. is being considered for several different types of business.

Phillip Bradshaw, chairman of the Isle of Wight (Va.) Board of Supervisors, called the news “outstanding.”

“These are entirely new markets for International Paper, so they’ve got to develop a corporate business strategy to look at those,” he said. “I think it’s great that they’ve gotten to this point. It seems that they’re moving along faster than I had anticipated.”

“Isle of Wight County is here to work with them,” Bradshaw added. “That is the message we continue to send to them.”

Franklin, Va. Mayor Jim Councill said he was encouraged that several of the repurposing options would provide opportunities for the local lumber industry.

“It appears that everything is lining up for something of a valuable nature to occur at the mill site,” Councill said. “We’re real happy about that. We were equally concerned about that industry as well.”

Wadsworth said there are no plans for paper or paperboard to be produced at the site.

In the year since the mill’s closure was announced, she said, there has been “considerable interest” in potential repurposing of the plant.

“As we move forward with feasibility studies and explore various options, we will be engaging in more in-depth engineering evaluations, cost analysis and understanding of environmental permitting implications before determining the viability for any of the options,” Wadsworth wrote.

While he cheered the news about the mill site repurposing, Bradshaw said Isle of Wight is actively working to diversify its tax base so it doesn’t once again become dependent upon one business for such a large chunk of its revenue.

Councill also said it’s important to continue to support local small businesses, which he said have been “hanging on with faith” that something new would come in.

“I think we’re getting really close,” he said.

(Nicholas Langhorne is a Staff Writer for the Tidewater News in Franklin, Va., a sister publication of the Roanoke-Chowan News-Herald and Gates County Index.)

WINDSOR – Bertie County Schools recently honored its 2010-11 Teachers of the Year. At the October meeting of the Bertie... read more