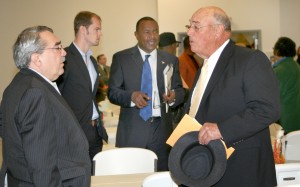 JACKSON — It was a ground breaking ceremony, only without shovels and dirt.

On Monday morning, the wet weather kept the ground breaking ceremony for the new Northampton County Department of Social Services (DSS) facility inside, but it failed to dampen the excitement for the project.

“I’m excited for the citizens; we’re here to support our citizens,” said Wentzy, who heads the agency that comes into contact with 43 percent of the citizens in the county.

The new facility took six years to come to fruition.

The project was made possible through a unique opportunity for the county to be reimbursed for 65 percent of the cost of the building as well as American Recovery and Reinvestment Act (ARRA) funds funneled through the United States Department of Agriculture Rural Development.

Wentzy spoke about the results the ARRA funds have put forth.

“When I hear someone say they can’t see what the stimulus funding has done, I really honestly wonder, ‘Where do you live’?” he said. “This building, in great measure, is made possible through stimulus federal funds.”

DSS Board Chair Eugene Taylor showed his excitement for the new building.

Northampton County Commission Chair Fannie Greene agreed it was a great day in Northampton County. She noted the six year journey in making the facility possible and how the day was a major, symbolic move in completing a goal in constructing the new facility.

She noted how more than 40 percent of citizens in the county come in contact with DSS.

“DSS provides caring services to the sick and disabled, to the abused and neglected, to the hungry and the needy, and assists the needy in getting jobs and keeping jobs,” she said.

Greene continued by saying that, likewise, DSS acted as a emergency responder through several programs and was the lead agency in providing emergency shelters.

“So today, on behalf of the Northampton County Board of Commissioners, we thank the DSS team for their services,” she said. “But we also want to thank each of our citizens for the privilege and opportunity to serve each of you.”

Gore said the day was about the all the hard work that had been done as well as the leadership within the county.

He also noted how the stimulus funding, which brought $2.2 billion into the state, helped the project.

“Without the stimulus dollars we wouldn’t have been able to appropriate $7.46 million of this project,” he said.

Representative Michael Wray, who was unable to attend the event, sent a letter in his absence. Wentzy read the letter on Wray’s behalf.

“You are gathered today not to simply celebrate a building, the important thing for this community is what this building will allow us to do,” the letter stated. “This building will allow us to deliver modern-era services more easily to the people of this county who need and deserve better. It will help us to look forward and think about ways in improving our services rather than simply having to make-do with our existing facilities.”

Senator Ed Jones spoke about how the facility meant a lot to the county.

“Now if it was coming to Wake County or Mecklenburg, there probably wouldn’t be this many people here,” he said.

Jones said for those who utilize DSS services the new facility will provide dignity.

“There are so many of us who, when we spent our tax dollars, we wonder it’s going…most of the time it goes to help the least of us,” he said. “And so this building for the least of us will come for services.”

Butterfield recognized USDA Rural Development, which he described as” one of the big secrets in our federal government,” for the work it does not only in Northampton, but across the country as well.

“This agency is not celebrated as it should be,” he said. “The fact of the matter is we give billions of dollars every year to the Agriculture Department and in turn to the Office of Rural Development, they administer loans and grants to local communities all across this country.”

He went on to speak about how the ARRA funds help save the country from going into a depression.

“When we first started this session of Congress, your country, my country was on a verge of a depression,” he said. “I don’t mean a recession—we were already in a recession—a worldwide recession.”

Butterfield said both Democratic and Republican economists were already confirming that. He said the fact that the country could “go under” was very sobering and recalled how his own parents lived through the Great Depression.

“From the first day of this (presidential) administration we had an emergency, the way we started resolving this emergency was to pass the American Reinvestment and Recovery Act,” he said.

Butterfield noted how part of the stimulus money was put aside for the Office of Rural Development.

“And that’s why we are able to (break ground) on this DSS building,” he said. “So you need to understand when you hear the critics talk about how Democrats threw away $787 billion of taxpayer money that we didn’t have, I want you to think about Northampton County, I want you to think about the DSS building and the other good things that we’re doing. We haven’t gotten where we need to go, but we are certainly moving in the right direction.”

The 66,869 square foot facility will accommodate the 76 employees that work at Northampton County DSS.

Wentzy said the project will be bid out in December and he hopes to see construction begin around January or February. Construction of the facility is expected to take 10 to 12 months to complete.

To the Editor: This is an open letter to my fellow citizens of Northampton County. We have important mid-term elections... read more