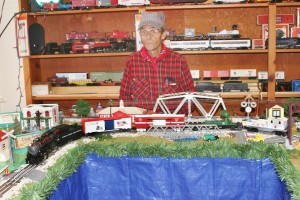 Tom Waicul has expanded his display of model trains at the Colerain Museum. An open house is planned at the museum from 10 a.m. until 2 p.m. on Saturday, Oct. 30. File Photo by Thadd White

COLERAIN — See all the new additions, plus the traditional displays, at the Model Train Depot located inside the Colerain Museum.

Waicul began collecting trains when he was a child and now has turned that love for them into an exhibit at the Colerain Museum. That exhibit opened in December of last year after four months of preparation.

“I’ve been collecting them all my life,” he added. “I just like trains. I have always loved trains. They amaze me.”

The museum display contains both Marx and Lionel trains. Waicul said he loved collecting both types and that he was glad to be able to set up the room with all of the amenities, including the trains, track and village settings.

He said one of the reasons he liked the idea of the exhibit at the museum was the opportunity to show the trains to children, especially those at nearby Colerain Elementary School.

Waicul moved here eight years ago when he and his wife bought a home in Colerain to restore. Their home is on the National Register and has been a project since the Waiculs moved to Bertie County.

“I like it here,” he said. “We’ve lived in the country all our lives, even in Florida, and I think this place is wonderful.”

As work on restoring the old home continued, Waicul said he hoped to have a room to set up his trains, but it never happened. The idea then came to make the trains a display at the museum.

Donations are welcomed to help defray operational costs of the train display at the museum.

For more information about the collection or to schedule group tours, contact Waicul at 356-6552.