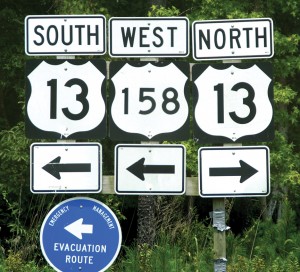 The North Carolina Department of Transportation is planning to upgrade a 7.1 mile stretch of US 13/158 in Gates and Hertford counties to a four-lane divided highway.

GATESVILLE – During an August public hearing where plans were formally unveiled to widen, to four-lanes, a 7.1 mile stretch of U.S. 13/158 in Gates and Hertford counties, NC Department of Transportation officials said there was some flexibility in the design of the project.

Recently, a handful of Gates County officials lobbied the DOT for that “flexibility.”

During two meetings, one in Gates County and the other with DOT Secretary Gene Conti in Raleigh, the local contingent asked for the project’s superstreet design at intersections be given a second look.

At their meeting here last week, the Gates County Board of Commissioners held a lengthy discussion in regards to a resolution to be sent to DOT officials, one basically saying the board doesn’t feel the superstreet design has the safety of Gates County citizens in mind.

Commission Vice-Chairman Kenneth Jernigan noted that a meeting with DOT officials occurred recently in the county. Gates County citizen Earl Rountree, now retired from the North Carolina Board of Transportation, arranged the meeting.

“We felt like when we held that meeting that we were getting nowhere with the DOT people there,” Jernigan said. “They sort of felt like their engineers’ hands were tied on the project because they had been told to draw up these plans of a superstreet design. They were not backing off those plans.”

“In talking with Secretary Conti, he said it was not a state policy to have every intersection done that way (the superstreet design),” Jernigan said. “So, we came out of that meeting feeling good, thinking he (Conti) would at least go back and look at two of these intersections – the one there at NC 137 and the one at Tarheel Barbecue, the ones we wanted reevaluated.”

Jernigan noted that a superstreet design prevented traffic coming in from adjoining roads from crossing directly over to gain access, north or southbound, to the planned four-lane highway. He said that would directly affect big trucks, especially the log trucks attempting to access US 13/158 from NC 137.

“If they need to go south, then they first have to turn right (north), go a short distance and make a u-turn to go in the direction they need,” Jernigan said. “We’ve all been in towns all across our state and what one sign do you see in those towns – no u-turn. But yet they’re building a highway where every intersection has built-in u-turns. We don’t feel that every intersection needs to be built that way.”

Jernigan added there were nine u-turns on DOT’s design of the local project.

“I looked at the design on the website. If you are going left, you would have to have a medians designed large enough for a truck to wait for oncoming traffic to clear,” Commissioner Henry Jordan noted. “I can see the concept, I don’t have a problem with the superstreet design, it’s a safety factor. If a big truck is waiting for traffic to clear, then his trailer is stuck out in the travel lane and traffic will have to stop.”

Jordan added, “We need to recognize that these guys (DOT) have the statistics to prove that this type of design is needed. There is some creditability to what they say.”

Jernigan countered by saying even with the superstreet design, when a big truck turns right and then has to make a u-turn to go back left, the trailer will still be across two lanes, basically blocking traffic going in that direction.

“My biggest concern is that our fire trucks will have to go a greater distance to make a turn to go in the other direction, adding to their response time,” Commission Chairman Graham Twine noted.

Jernigan mentioned the efforts of the Eure Volunteer Fire Department to improve their response times as well as upgrading their equipment. That, he noted, has led to a better fire protection rating, thus lowering the homeowners insurance of the citizens living in the Eure fire district. He said he was concerned that those insurance policies would rise, by 17 percent according to research, if the Eure firemen were forced to increase their response time.

“What we asked for was for DOT to just study this further, to see if there was something else they could do other than put in all these u-turns,” Jernigan said. “We didn’t ask them to change every intersection, just look at some of these.”

“We need to identify our concerns,” he said.

Upon Jordan’s suggestion, the resolution was rewritten to address fire department vehicles, EMS vehicles and heavy industrial traffic. That resolution, a copy of which will be sent to Senator Jones and Representative Mobley, will be forwarded to DOT officials.

DOT plans to spend $56,809,600 of NC Highway Trust Fund money on this “design-build” project, one that begins at the US 158/NC 45 intersection at Winton and ends at Tarheel Barbecue in Gates County. The plans call for widening the road to four lanes, including the addition of another two-lane bridge over the Chowan River, west of the existing span.

Survey work is already underway with right-of-way acquisition scheduled to begin next year.

FOR THE PROPOSED PROJECT WIDENING US 13-158

IN HERTFORD AND GATES COUNTIES

WHEREAS, due to the proposed project of widening US 13-158 from US 158/NC 45 near Winton in Hertford County to US 158 at Tarheel in Gates County from two (2) travel lanes to four (4) travel lanes including a median, and

WHEREAS, the North Carolina Department of Transportation is recommending an expressway or superstreet concept type of roadway be recommended for this project, and

WHEREAS, the superstreet concept prohibits minor cross-street traffic from going straight through or left at a divided highway intersection, and

WHEREAS, with the superstreet concept minor cross street traffic must turn right, then access a U-turn to proceed in the desired direction, and

WHEREAS, the Board of Commissioners does not feel the superstreet concept has the safety of Gates County’s citizens foremost and first in this consideration.

NOW, THEREFORE, the Gates County Board of Commissioners would like to have the North Carolina Department of Transportation review the superstreet concept in regards to the Proposed Project of Widening US 13-158 in Hertford and Gates Counties and propose other means of directing traffic at intersections and side roads.  The Board of Commissioners are specifically concerned with the superstreet concept as it relates to fire department vehicles, EMS vehicles and heavy industrial traffic.