The bride is the daughter of Mr. and Mrs. Leslie Keith Smith of Como. 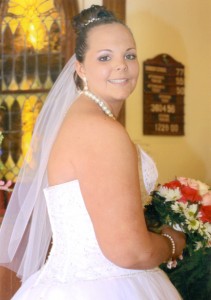 The groom is the son of Don Ferguson II and Carolyn Ferguson.

The bride wore a strapless ball gown with a full tulle skirt.

Dressed in pink strapless tea length dresses, Sarah Jones of Aulander served as the Maid of Honor while Bridesmaids were Lynn Darden of Murfreesboro and Elizabeth Ferguson of Portsmouth, Va.

The Best Man was Brett Phelps of Chesapeake, Va. Groomsmen were Beau Hoggard of Suffolk, Va. and Lee Hoggard of Portsmouth, Va. They all wore black tuxedos with pink ties and vests. The groom wore a white tuxedo.

A reception followed the ceremony at Leisure Shores.

Following a honeymoon in Atlantic City, NJ, the couple now resides in Como.

A bridal shower was given by Denise Flanagan and other family and friends.

A bridal shower was given by family and friends in Portsmouth, Va.

A birdseed bagging party was given by Ethel Mae Knowles.