The wedding, held at sunset overlooking the Albemarle Sound, was conducted at the home of Thomas and Rhonda Cobb of Mackeys. 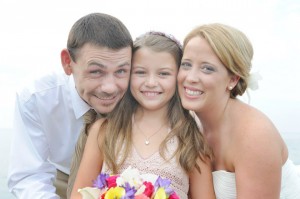 The bride is the daughter of Henry “Roger” Kiker.

The groom is the son of Buddy and Vicki Byrum.

Rhonda Cobb, sister of bride, was the Matron of Honor.

Flower girls were Kelsea Byrum, the couple’s daughter, and Emma Cobb and Karis Kiker, both nieces of the bride.

The bride and Matron of Honor carried a tropical array of flowers. The men wore calla lilies.

Officiates in wedding were Dr. Rev. Tommy Kiker, brother of bride, and the Rev. Henry Roger Kiker, father of bride. Rev. Roger Kiker began the ceremony by giving his daughter away in marriage and then assisted in the exchanging of vows.

The couple honeymooned at the Isle of Palms, SC.

AHOSKIE – Rebecca Gay Feher and Justin Christopher Burden were united in marriage on September 18, 2010 during a 4... read more