The bride is the daughter of John R. and Gay H. Feher of Early Station Road, Ahoskie. 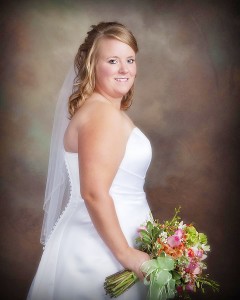 The groom is the son of Chris and Sharon Burden of Ray Farmer Road, Aulander.

Given in marriage by her father, the bride worn a line gown with side split tulle inset, beaded detail at the waist and a button back.

Caroline Feher of Ahoskie, sister of the bride, served as the Maid of Honor. Bridesmaids were Mandy Feher of Ahoskie, Rebekah Feher of Greenville, Ashley Shaffer of Aulander and Kayla Overton of Ahoskie. They wore clover chiffon bubble dresses featuring strapless satin bodice and an empire waist with beading and metallic embroidery.

Chris Burden served as his son’s Best Man. Groomsmen were Tyler Burden, Mike Burden and Josh Adams, all of Aulander, and Justin Freeman of Greenville.

The ring bearer was Jarrett Burden, son of Mike and Brandy Burden of Aulander.

The wedding reception was held in the Liberty Free Will Baptist Church Family Life Center.

Following a honeymoon to Myrtle Beach, SC, the couple will reside on Early Station Road, Ahoskie. They both work in the local area – Mrs. Burden at Roanoke-Chowan Hospital where she is employed as a registered nurse and Mr. Burden who is employed at Ahoskie Animal Hospital.