Chowan University’s football team withstood a furious Virginia Union University rally in the final minutes and then snuffed out any chance at a Panther comeback by recovering an onside kick. The result was the one-point margin, 35-34, held up for the Hawks’ first win of the season.

Junior quarterback Steven Carroll, subbing for starter Cameron Stover, came on in the early minutes of the second quarter and finished with 183 yards passing on 30 attempts with three touchdowns and one interception.

Chowan’s 345 yards of total offense was their highest offensive output of the season.  The win was the Hawks’ first in the Central Intercollegiate Athletic Association this year as well.

It was also Chowan’s first-ever televised football game and was seen by hundreds of viewers live in Charlotte and later on tape-delay in a nine-state viewing area stretching from Ohio and Pennsylvania to Louisiana.

“It wasn’t the best ending for our first TV game,” said jubilant third-year coach Tim Place afterward, “but a win’s a win and I’ll take it any way and any time we can get it.

“It was a complete effort,” he added, “and while some things hurt us, we started together and we finished together and that’s what’s important because we just beat a great program.” 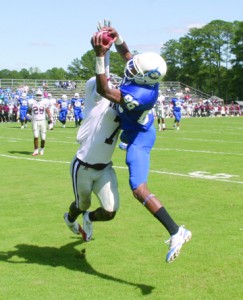 After three-and-outs by both teams to open the game, Chowan knocked Panther quarterback Aris McGlone-English out of the game when Dakoria Desamme sacked him for a 10-yard loss forcing a VUU punt.

Stover then drove the Hawks 75 yards, highlighted by his own quarterback-keeper run of 27 yards, before finishing the drive with a 10-yard strike to Holland in the back of the end zone. Embree’s point-after provided a 7-0 Chowan lead.

Stover himself left the game early in the second quarter after he was sacked for a loss and fumbled, but managed to fall on the ball and prevent a Chowan turnover and was injured in the process.

Carroll entered the game at the seven-and-a-half minute mark and things did not start well for the California junior.  His first drive stalled and on his second drive he committed Chowan’s first turnover in more than nine quarters when he was intercepted at midfield.

After a penalty moved the ball to the Chowan 39-yardline, VUU’s Jere Washington ran it in from there to knot the score at 7-7 following the point-after.

Things got especially dicey in the final minute of the half.

First, Tony Goodman returned a punt 66 yards for Chowan’s second score to give the Hawks a 14-7 lead; then Anthony Hooks, who had two interceptions in the Virginia State game, collected his second pick of the day against the Panthers just as time was winding down to halftime.

Chowan entered the break up by a touchdown.

It didn’t take the Hawks long to pick up where they left off to start the third quarter.  Carroll completed five-of-six passes and ran twice before hitting Eddie Coard on a screen pass and, despite the missed extra point, the Hawks led by 13, 20-7.

With the score, 20-14, Carroll hit Holland for a touchdown, then passed to him again for the two-point conversion and a 28-14 lead.  But the two-touchdown cushion was short-lived as the Panthers came right back and scored on a 79-yard kickoff return.

Chowan scored to open the fourth quarter and gain another 14-point advantage, 35-21, on the second Carroll-to-Holland connection of the day. Then for the next eight minutes the only highlight was former Hertford County High star Leon Eason’s first interception of the year and Chowan’s third pick of the game.

But with under three minutes to go VUU drove 60 yards for one score to get within a touchdown and then recovered the onside kick with under a minute-and-a-half to play.

The Panthers then silenced the boisterous Chowan crowd with a 64-yard drive that got them within a point, but Stephen Velasquez’s kick sailed to the right of the uprights and the drama ended when Holland recovered the onside kick and the Hawks ran out the clock.

“I just wanted to make plays, man,” said an exhausted, but humble Holland after the game. “If we keep focusing, we can do this every week, but it takes hard work.”

“The coaches tell us never quit,” added Eason. “When they (VUU) started coming back on us at the end, we just kept fighting.”

“I’d had a good week of practice,” said a smiling Carroll, who finished with 196 total yards on the day. “I had some rough going to start the year, but I hope I showed today that I can help this team win.”

“It comes down to us in the end,” added offensive linemen Nick Watts and Charles Wright.  “It doesn’t matter what quarterback is in there as long as the front five do their job.”

Chowan (1-4, 1-1,CIAA) gets another chance at home to do the job this Saturday when they host Lincoln for Homecoming.

Kickoff at Garrison Stadium is set for 6:05 p.m.