The historic building has been the subject of much discussion by the Bertie County Commissioners in recent months as the body has worked with Bertie County Sheriff John Holley to improve the safety of citizens using the courthouse. 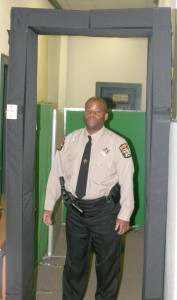 The improved security began when commissioners approved a new employee for the Sheriff’s Office to man a metal detector on the second floor of the courthouse. As part of adding the metal detector, the court room entrances have been filtered through the doorway with the detector so that all persons enter in that doorway.

It continued with the installation of a dozen panic buttons in strategic locations throughout the courthouse square. Those locations included access for those both inside and outside the court rooms in the facility.

Last week, the board approved an additional amount to add three fingerprint readers to allow acess only to courthouse personnel through the back entrances.

The fingerprint readers will be installed at the side door near the jury room and the back of the large court room.

Rascoe said Albemarle Sound and Security will also install an alarm system for the side emergency exit. He said the alarm would work well because the door was in the view of the deputy working the metal detector.

“The doors have to be left so the locked doors from the outside still have a fire escape mechanism from the inside,” said Dean Mizelle of Albemarle Sound and Security.

He said the fingerprint system would allow the door to unlock from the outside when someone presented a recognized fingerprint, but the door would be easily opened with a handle from the inside in case of emergency.

He said the system was also easy to maintain for both additions to the approved entrants and deletions from that database.

“What if the electricity goes out,” Harrell asked.

After more discussion, Commissioner J. Wallace Perry said he believed the county needed to move forward with the project and offered a motion for its approval. Commissioner Charles Smith offered a second and it passed by a unanimous vote.