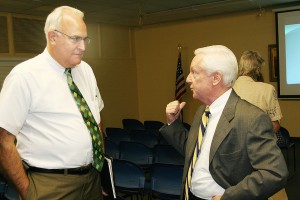 MURFREESBORO — We are ready.

On Wednesday evening, Murfreesboro citizens made it clear they are eager for the start of Small Town Main Street program in their town.

Approximately 50 citizens and organization representatives gathered at Chowan University’s Mulberry Grove Room for an overview of what to expect and how to utilize the NC Department of Commerce program.

The meeting was the final of several held that day by the Small Town Main Street resource team who toured the town and conducted interviews.

“Tonight what we would like to do is go through the program; what it’s all about, how it’s working in the 28 towns we’re currently serving with the Small Town Main Street program, show you some examples of the things that are being done in other communities that hopefully will translate to your community,” said Bob Murphrey, Eastern North Carolina Small Town Main Street Coordinator.

Murphrey, along with Designer Stephanie Richardson and other staff, will provide technical assistance to the town partnering with local government, citizens, committees and organizations as well as Roanoke Chowan Community College and Chowan University to work on Small Town Main Street.

Created in 1980 by the National Trust for Historic Preservation, North Carolina was one of the first states to join the program. Murphrey said today 46 states and 2,000 communities are involved with the Main Street approach.

Murphrey and Richardson will be the Main Street Managers for the town for approximately two years, working with the community on a monthly basis. During that time, Murphrey said they are building the community’s knowledge of how to carry things on their own. After two years the town remains in the program, will still receive advice, but the visits will not be each month.

Organization will develop effective management while promotion will range from increasing sales to marketing to festivals. The design aspect will focus on the visual quality of the downtown and economic restructuring will strengthen the current assets of the town while adding to its economic diversity.

“We know and you know that your downtown is not like it was in the 1950s or 60s anymore,” Murphrey said about economic restructuring. “So it’s important for us to find someway to restructure your downtown economy.”

Murphey said in order for the program to be successful, all four points must be going on at the same time. He also noted the program would take time to make a difference.

“The program is comprehensive and also incremental,” he said. “There aren’t any quick fixes to a downtown that has deteriorated overtime; these things need to comeback just as slowly as they have gone down.”

Murphrey reminded citizens of their vital role in helping make the program work.

“It’s a self-help program, if you as local citizens are not willing to invest your time, your effort, your money in improving the downtown then there’s not going to be much that we can do to help you.”

Richardson said her job will be taking the vision the town has for its future and putting it on paper.

The visual aspect of Small Town Main Street can be anything from building facades to murals to image promotions to master plans.

And while the program helps the town visually, it also encourages preserving the age appropriateness of the buildings within downtown.

“You have to embrace what you have,” she said.

Murphrey gave the audience a schedule of what to expect out of up coming meetings.

The next meeting will take place at 3 p.m. on October 5 at Metal Tech. Murphrey said that will be an organizational meeting. At that meeting different committees will be formed and projects will be identified.

Those who attended the first meeting seemed excited about the program.

“Murfreesboro, we are ready. Are we not,” Mayor John Hinton asked the crowd who answered with a resounding “yes.”

“I think we have a lot of community interest to make it successful,” he said.

Those towns joining Murfreesboro in the Small Town Main Street program this year are Catawba, Highlands, Plymouth, Troy and nearby Scotland Neck.