MERRY HILL – Momentum…you either have it or not.

Lawrence Academy held “old mo” in the first half here last night (Friday) but failed to find it over the final 24 minutes of action.

The end result saw the Warriors waste a 24-20 halftime lead and fall to visiting Cary Christian, 48-24, in a NCISAA 8-Man football contest. 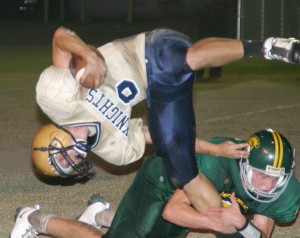 With the loss, Lawrence falls to 1-4.

The numbers back up the momentum theory. Lawrence complied 272 total yards and four touchdowns in the opening half of play. The second half saw the Warriors net only nine yards of total offense while being shut out of the endzone.

The game’s momentum turned on one key series early in the third quarter after Cary Christian had scored to take a 28-24 lead.

Held to a three-and-out after their initial possession of the second half, Lawrence punted. Cary Christian’s Sam Casucci gathered in the punt at his own 30 yardline and was rocked with a tackle by Cade Larabee. The ball squirted free and was recovered by Willie Bass, giving Lawrence the pigskin at the Knights 29 yardline. Runs by Travis Whitehead and Larabee pushed the ball inside the red zone as the Warriors had a 1st-and-10 at Cary’s 17 yardline.

Unfortunately for the home team, it went downhill from there as Lawrence lost 21 yards on its next four plays, surrendering possession on downs at Cary’s 38 yardline.

From that point forward, the visitors took control of the game.

Two plays later, Cary’s Matt Daum reeled off a 60-yard scamper to paydirt, drastically swinging the momentum back to the Knights as they led 34-24 with 4:28 left in the third quarter.

With Lawrence’s offense bogging down for the remainder of the game, Cary pulled away. The visitors added two scores by air – a 19-yarder from James Peterson to Daniel MacPherson with 14 ticks left on the third quarter clock and a 7-yard TD pass from Daum to Casucci that rounded out the scoring with 9:05 left in the game.

The pass-happy Knights finished the contest with 246 yards through the air. Peterson led that effort by going 11-of-14 for 177 yards and four TDs.

The first half belonged to Lawrence.

Taking the game’s opening kick-off, the Warriors scored in only three plays…a 25-yard run by Whitehead and 22 yards from Larabee to set-up a 5-yard TD run by Scott Dunlow at the 8:46 mark of the first quarter.

That lead didn’t last long when, 20 seconds later, Casucci took the last step into the endzone after returning the ensuing kickoff 85 yards. Daum ran in the conversion as Cary gained an 8-6 lead.

Lawrence came back later in the first quarter, using a 53-yard TD run by Whitehead to regain the lead at 12-8.

Cary again answered quickly, scoring on first down after the ensuing kickoff on a 57-yard TD pass from Peterson to Keith Hylwa. Dunlow laid out to bat away the conversion pass, but Cary went back in front, 14-12.

Lawrence answered with a six-play drive capped by Whitehead’s four-yard scoring run to hand the Warriors the lead at 18-14 at the 9:12 mark of the second quarter.

Whitehead finished as the game’s leading rusher with 157 yards on 14 carries. He had 152 rushing yards at halftime.

The Warriors extended their lead to 24-14 just past the midway mark of the second quarter, using a big 35-yard scamper by Whitehead to set-up Larabee’s three-yard TD run.

Larabee finished the game with 97 rushing yards on 16 carries.

Cary did bounce back right before halftime, again going to the airwaves to inflict their offensive damage as Peterson connected with Hylwa on an 11-yard scoring pass that trimmed the Knights deficit to 24-20 at intermission.

The Knights grabbed the lead for-keeps (28-24) on the first series of the second half where Peterson tossed a 29-yard scoring strike to Casucci. Peterson ran in the conversion.

Lawrence travels to Rocky Mount Academy next Friday (Oct. 1) for a 7:30 p.m. contest.