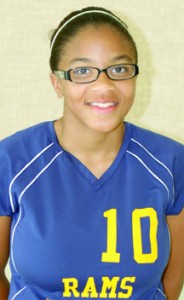 “We did most of our damage at the service line led by senior Brandi Keeter,” Rams’ Head Coach David Hasty said.

Keeter recorded five aces for Northampton-East. Senior Patrice Williams added three aces to go along with two kills and orchestrated an 11-point run in the second game during her serve. She also had a key block.

Junior Marendy Cannon added to the offense with two kills.

On the serving end, it was Cannon, Keeter and junior Alexus Shoulders who recorded three aces each.

The Lady Rams are back in action today (Thursday) as they travel to league rival Gates County High School.