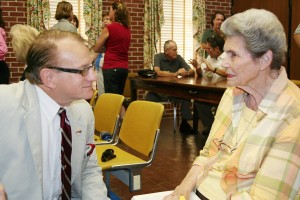 Lee Capps chats with Jennifer Moore on Tuesday morning, just after the Murfreesboro Town Council voted to reinstate him as the town administrator. Moore was among a group of town citizens supporting Capps. Photo by Amanda VanDerBroek

Approximately 45 citizens gathered for the continuation of a meeting that was recessed last week. Mayor Pro Tempore Molly Eubank moved to go into closed session for personnel. The motion was seconded by Councilwoman Gloria Odum and passed with no objection.

After more than an hour and a half in closed session, the council returned into an open meeting. Councilman Lloyd Hill moved to reinstate Capps as town administrator and the motion was seconded by Eubank. The motion passed in a 3-2 vote with Councilman Billy Theodorakis and Councilwoman Sarah Wallace voicing their objection.

Town officials released a statement saying after they met with Capps in the closed session they voted in open session to reinstate him to his former position as town administrator.

“Mr. Capps vowed to vigorously prosecute the town’s work and perform all administrative functions of his position,” the statement reads. “The Council vowed to ensure Mr. Capps fully understands what is expected of him in that regard.”

After the meeting, Mayor John Hinton spoke to the Roanoke-Chowan News-Herald regarding some misconceptions swirling around the meeting and the town.

“The meeting on September 9 was not an emergency meeting, it was a special meeting,” he said.

He noted any two council members can call a special meeting and 48 hours notice was given to the public. Murfreesboro Town Clerk Joleatha Chestnutt did provide a fax receipt to the News-Herald as proof the meeting notice was sent, though the News-Herald office did not receive the notice.

Hinton checked with the University of North Carolina Institute of Government and 63 percent of towns in the state with a population less than 5,000 operate under a Council/Mayor form of government, according to the 2000 U.S. Census. Murfreesboro has a population of approximately 2,000.

Hinton also addressed the grease trap issue commented on by a user of r-cnews.com.  He noted that it was the responsibility of the Public Works Department, not Code Enforcement, to oversee the installation of grease traps by local restaurants as required by the state.

At a special called meeting on Sept. 9, the Murfreesboro Town Council unanimously voted to dismiss Capps. That dismissal was based upon Capps’ “failure to perform administrative duties in a timely and efficient manner and failure to inform Council of projects being worked on.”

Capps was ordered to remove all of his personal belongings from the Town Hall by 5 p.m. on September 10. He was also asked to return all keys, two Blackberry Phones and Town credit card to the town clerk.

At their regularly scheduled meeting on Sept. 14, the Murfreesboro Council, during public comments, came under fire for their decision. That was followed by numerous signs erected throughout the town in support of Capps, calling for his reinstatement.

Capps no stranger to controversy